1. I have a huge pet peeve right now, and that is passive-aggressive bullshit. I'm sorry for the harsh language but that's as tame an adjective as I can figure out right now. If someone has a problem with ME and/or my parenting abilities, I expect them to come to ME about it instead of gossiping to my relatives about the issues they have with me. I've had this happen to me THREE times, by three different people, in the last several weeks and I've just about reached my breaking point about it. For goodness' sake, this is real life, not junior high school. I want people who have problems with ME to come to ME about it so we can talk about the problem like mature adults and deal with it. I don't want people who have problems with me to go to my relatives and start bitching about why I'm such a terrible person to them, until eventually I hear about said bitching second- or third-hand. Grow some balls and address your problems about me with me or keep your trap shut so I don't have to hear about it.

2. As #1 indicated, we have several stressful situations going on right now. One I can't really talk about but relates to the passive-aggressive bullshit described above. The other is Violet's ongoing diarrhea. Here is the saga about what's being going on; in the future I think I will refer all of my relatives to this post so they can see that yes, we ARE concerned, and yes, we are taking steps to find out the cause.

3. Violet started having diarrhea a month ago. At first, we figured it was just a run-of-the-mill virus. She had no other symptoms (no fever, etc.). When about a week went by and there was no change, Collin took her to our PCP, a family practice doctor. He diagnosed it was the rotavirus and told Collin that all we could do was keep her hydrated and wait until it passed. He told us it could take several weeks. So, we did as he said. Another week passed and there was no change. We called our insurance's Ask-A-Nurse line three times, speaking with three different nurses, and asked for advice. They told us the same thing that our PCP had -- since she was otherwise symptomless and there was no visible blood in her stool, it was probably a virus. Keep her hydrated and watch for more symptoms.

Finally, this past week, we called Ask-a-Nurse again and expressed our frustration that the diarrhea was still going on. They advised us to take her back to the doctor. As our PCP couldn't fit us in until next week, I ended up taking her to Urgent Care on Tuesday (May 3). I brought a stool sample with (a diaper from the previous evening that had been bad). They found a tiny amount of blood in the stool (not visible to the naked eye, only by testing) and told me to take her to the pediatric ER. I did so, immediately. After she was seen in the ER, the PA said to me, essentially, "I don't know why you're here." She felt that the Urgent Care doc had overreacted because Violet appeared healthy, active, and, in her words, "looked great." (The lab report from Urgent Care, by the way, stated that Violet also appeared healthy, well-groomed, and was developmentally on target.)

At the ER, the PA did a rectal exam (negative for blood) and a urine sample (normal). Since they couldn't find anything wrong, they referred us to a pediatric GI specialist. Collin took the next day off of work (May 4) and took her to the GI specialist. He did some bloodwork and has us doing daily stool samples for the next 10 days, has given us probiotics to aid her digestion, and has instructed us to eliminate dairy from her diet (all of which we are doing).

But apparently, according to others, we aren't doing enough. He and I are completely out of sick time now, so if either of us get too sick to work in the next several weeks we're screwed.

4. NEWSFLASH: Kids get sick, especially if you have a kindergartener who picks up every possible germ. If it seems like our kids "are sick all the time," it's probably because KIDS GET SICK, especially little kids who have a sibling in public school. Plus, the seasons are changing right now which always brings on a fresh spate of illness. If you haven't been inside my house, please don't presume to judge the cleanliness thereof. I'm not Martha Stewart but our home is not unsafe or unhealthy.

5. As if I didn't have enough going on, the all-day morning sickness and first-trimester fatigue has been kicking my ass. I have Zofran, and it helps, but only a little. It's gotten better the last day or so, but now I have stomachaches due to all the stress. On top of that, William had a stomach bug late last week (one that's been making its rounds through the school system, so of course Elly brought it home) that he passed to me, so I spent all weekend sick as a dog and unable to keep down even crackers and ginger ale.

6. I have my first prenatal appointment + ultrasound scheduled for Tuesday. I'm very nervous about it, which isn't helping my stress level, but after my horrible first-trimester ultrasound experience with Noel (the first baby I lost) in which we discovered s/he had died, these early ultrasounds always make me anxious.

7. Let's try to end this with some happier news. Let's see. Elanor lost her first tooth last weekend. She was very excited and the Tooth Fairy left her a dollar. She and I also worked together on a science project for her class. Her instructions were to make something space-themed. We made a diorama of her visiting the moon. I think it turned out pretty well given my limited crafting abilities: 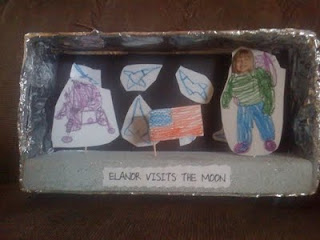