Collin's new job is going well! We're slowly adjusting to the new normal. It's both strange and wonderful to have him around in the evenings. He is thrilled to be programming, and to have a job where the work is both interesting and challenging (and doesn't involve disgruntled customers screaming at him 10 hours per day).

We've made an informal New Year's resolution to be more active as a family this year, so last weekend we hiked the Waterfall Trail at White Tank Mountain Regional Park (very close to our home). It's a two-mile hike, round trip, and beforehand we had a picnic at the little playground across the road from the trailhead. It was a fun day and not nearly as grueling as I thought it would be.

I've been listening to a quite a bit of iTunes Radio lately -- I made a station based on "Let It Go" by Idina Menzel (from Frozen - which is a TERRIFIC movie if you haven't seen it yet), and I'm loving it. Lots of Broadway showtunes, Disney songs, and other fun music. The other day this song came on and it brought back so many wonderful memories (my online friends and I were nuts about this song when I was in high school).

If you haven't seen the Full House guys sing Jimmy Fallon to sleep yet, please do! It's so adorable.

I bought my ticket for the Laugh4Hope event yesterday! Yay! It'll just be Peter and I, as we decided not to hire a babysitter given the late hour. Can't wait! 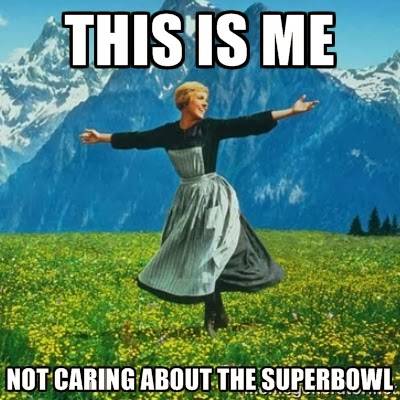 Nope, not even for the commercials.


In the first three pictures, he was young enough to be legally killed.

In the last four pictures, killing him is a crime. 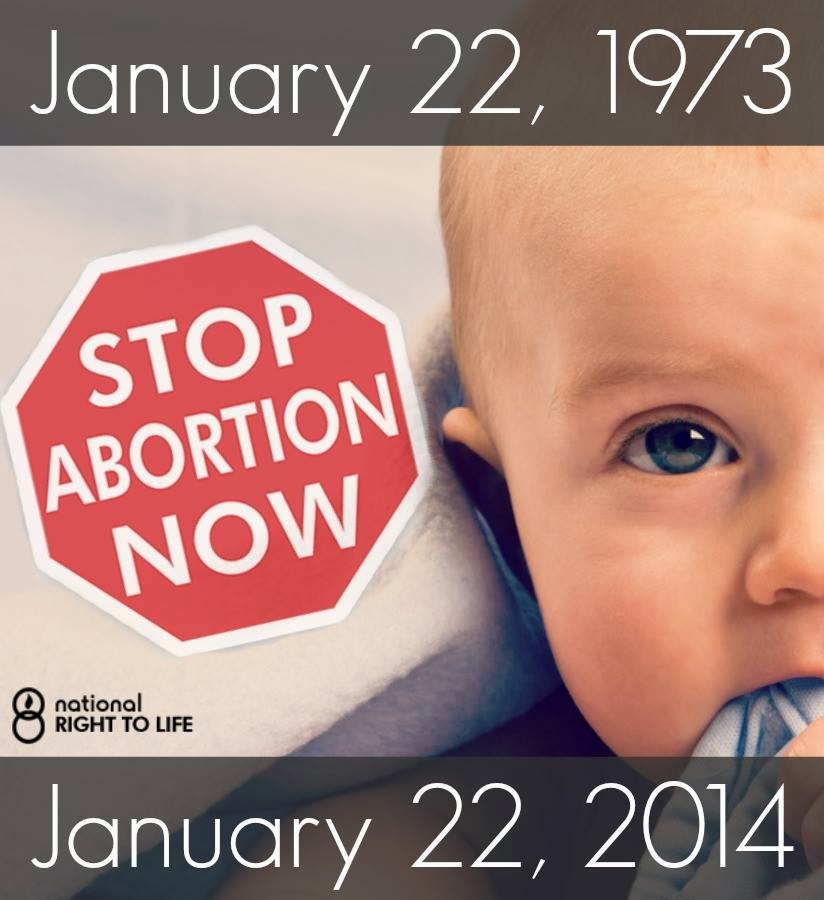 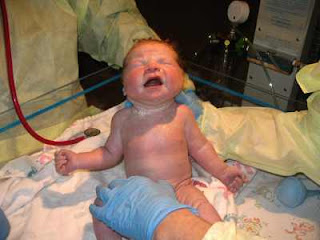 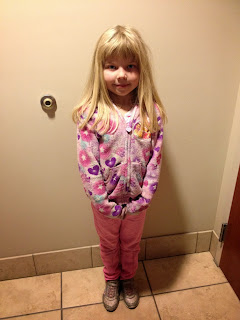 We had fun together at Disney on Ice yesterday. Today she's taking cookies to school and mini cupcakes to Religious Ed class. Supper will be pepperoni pizza, per her request.

Can't believe I have a nine-year-old. *sigh* I am so lucky to be her mom.

I have SUCH exciting news, y'all. Such exciting news that it deserves its own quick take. And increased font size, centering, bold, italics, exclamation marks, and yes, even ALL CAPS.

He applied for a position as an entry level software programmer for a company in Glendale, AZ (the west side, so less than fifteen miles from our house) shortly before Christmas. A few days after the New Year, they called and arranged for a phone screen. He did that and passed, because they asked him for an in-person interview last Monday (January 6). (Yes, that was the special intention you were praying for last week.) He thought the interview went really well, liked the company and the culture, etc. On Tuesday morning, he was offered the job! Quite obviously, he accepted. They asked him to start Monday, and he agreed, so he's already officially resigned from Apple. Today is his last day.

You know what this means? No more days of him getting screamed at non-stop by ill-tempered customers. No more working in his home office until 8:30pm four nights a week (meaning bedtime couldn't happen until 9pm or so). No more working Saturdays and major holidays. No more "incidents" for calling in sick. Best of all, he gets to do what he loves (computer programming), and what he's wanted to do professionally since he was twelve years old.

The pay is a bit of a raise - a few thousand more a year than he made at Apple. Not uncommon for an entry level programming position, but unfortunately not enough so that I can exit the workforce. Plus, we need to switch to my employer's health insurance for a while, since his benefits take a few months to kick in. Still, we're hopeful that with time, he can earn raises and/or promotions (unlike at Apple, where he had zero advancement opportunity).

It's going to be a big change for him, working outside the home for the first time in 5 years, so prayers are appreciated!

So. Yes. Very excited. In other happy news, Elanor turns 9 on Monday! Ack! She doesn't know this yet, but I'm taking her out to lunch and then to Disney on Ice on Sunday as a special mother-daughter treat.

I'm getting most of our Christmas cards out today. It's the 12th day of Christmas so it still counts, right? The rest will probably go out tomorrow as I have to get more stamps.

I normally don't do shameless bragging posts, but I have to say I am proud about how our Christmas card picture turned out. I've wanted to do a setup like this ever since Elanor and William were little, but I was never able to pull it together until this year.

I started scouting thrift stores for costume accessories in mid-November. I should have hit the costume stores right after Halloween to try and find some suitable ones on clearance, but I didn't think of that in time, unfortunately. I looked a bit online but didn't find much. I did find these super-cheap Nativity play costumes at Oriental Trading Company, but it was still more than I wanted to spend per costume. They were my last-resort idea if I couldn't find anything appropriate at thrift stores.

However, I hit Goodwill one day, and found two king-size brown pillowcases ($2.50 each) and a plaid cloth belt ($0.99). I used these to make William's "Joseph" costume. I used the headdress tutorial here to make his headgear from the first pillowcase. In the second pillowcase, I cut a neck hole using scissors, and made armholes using a seam ripper. I used one of his shirts as a rough guide for how big the holes should be and where they should be placed. I also found a long-sleeved brown shirt at Goodwill (I think it was $2.00), which he wore under the costume, along with black corduroy pants (I didn't really worry about pants or shoes because I figured they wouldn't show in the picture, and I was right).

I also found a narrow blue tablecloth at Goodwill ($2.50) which I used for Elanor's "Mary" shawl. I didn't do anything to it other than drape it around her. Under the shawl, she's wearing a white dress that was part of her Halloween costume (she was Dorothy from the Wizard of Oz, and wore the white cotton dress under a blue checked bib apron - it was her costume last year, too. I think I paid $10 for it at Kara's Halloween costume auction in summer 2012 or so). For her veil, I hand-sewed a blue pillowcase I already had in my linen closet to a blue headband. (I'm using "sew" in the loosest sense of the word - just a few quick stitches here and there. Safety pins probably would have worked as well.) I anchored it to her hair using bobby pins, as the headband by itself kept slipping.

Violet's angel costume stumped me for a while. I looked for a plain white dress in her size both at Goodwill and online, but couldn't find anything that would really work that was in my budget. Then I realized I could just use one of my myriad white T-shirts. The one she's wearing is my Phoenix Catholic Women's Conference shirt, which has a design on the back but is plain in front. She's also wearing white tights and silver shoes (both ones we had on hand, but you can't see them in the picture).

I found some mini-Christmas tree silver garland at Target (9 ft for $2), which is basically tinsel made with flexible wire, and used that to make her belt and halo. For her halo, I fashioned the garland into a halo shape and wrapped it around a white headband. (If I could do it over, I'd make the halo a bit shorter, but at the time I was in a hurry - it was the last thing I did.) I thought about trying to do wings out of tinfoil or something but decided I wasn't that ambitious, since they probably wouldn't be seen anyway. (She wanted to wear purple fairy wings but I talked her out of it.)

Gabriel simply wore the cow Halloween costume that I bought at Once Upon a Child for $5 a few years ago. He's the second kid so far to wear it.

I swaddled Peter in his blue Miracle Blanket (given to me by Leila when Gabriel was a newborn) as baby Jesus. I have a beige Miracle Blanket too but didn't have it on hand that day. Still, I think the blue one worked just fine.

I set everything/everyone up and used my actual digital camera (not my iPhone) to take the picture. I put Peter's carseat on top of a table, draped the white bedsheet over it, and put Peter inside. Violet is standing on top of the table behind him. I took six shots total and this one was the first and best, as well as being the only one where Peter wasn't crying (he didn't like being outside; it was a little chilly). Elanor wasn't looking at the camera, but oh well - it almost looks like she's praying, which works too.

Next year's pic won't be nearly as adventurous, I'm afraid, but I'm glad I did this at least once. Maybe I'll try re-creating it in 10 years and see what happens. :) 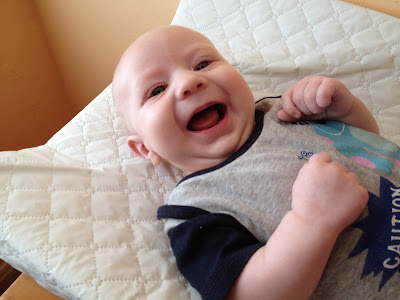 Please pray for a special intention! St. Joseph the Worker would be a good person to hit up for prayers. ;)

We have a new member of our family! Introducing Katniss! 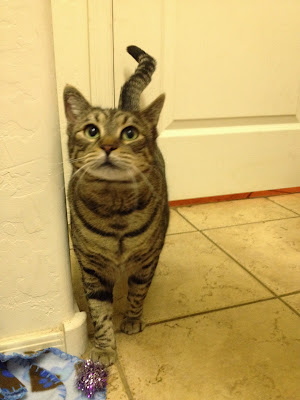 Instead of buying Christmas gifts for the kids this year, we decided to adopt a cat. We went to a North Phoenix branch of the Humane Society first, and while we saw some very sweet kitties there, none seemed like just the right fit for our family. The lady at the Humane Society suggested we try the Deer Valley PetSmart, which has an adoption facility run by Halo Animal Rescue. The Halo employee recommended two cats as being suited for a family with multiple small children, and we spent time with both of them. Our kitty, who was called Heidi Rae at the shelter, took our fancy right away. She wasn't fazed by the kids at all and played with them quite enthusiastically, and she wasn't aggressive in the slightest. The other kitty was nice, too, but she was a bit more afraid of the kids. So, we ended up adopting Heidi (and we promptly changed her name to Katniss on the way home). We've had her for less than a week and she's already fit into our family seamlessly. She's friendly, affectionate, and not at all bothered by toddlers running after her or the baby's fussing. The older two kids are learning how to keep her food dish filled and her litterbox clean (and they're doing a pretty good job so far). 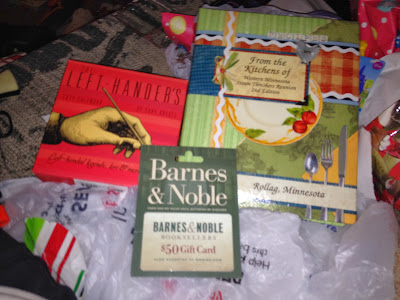 My dad knocked Christmas gift-giving out of the park this year. He got me the Left-Hander's 2014 Desk Calendar, a Rollag Steam Thresher's Reunion Cookbook (we used to go to Rollag together every year), and a gift card to Barnes & Noble! I've already used the gift card to order some books, among them Pope Awesome by Cari Donaldson and The Catholics Next Door: Adventures in Imperfect Living.


--- 5 ---
Collin's gifts to me were awesome too -- I got The Official Narnia Cookbook on Kindle, and Geekpriest and The Complete Father Brown Mysteries Collection for iBook. I have so much to read now!

My patron saint for 2014, thanks to Jen Fulwiler's Saint Generator, is St. Isidore the Farmer. Among other things, he is the patron against the death of children. Gulp.