We Interrupt this Blog for a Commercial Advertisement

I was going to put this in my Quick Takes yesterday, but I decided it really deserves a post of its own.

Our old coffee maker has been on its last legs for some time, so we finally broke down and purchased a new one last weekend. Rather than buying another $30 Mr. Coffee, we decided to upgrade a bit and bought one of these: 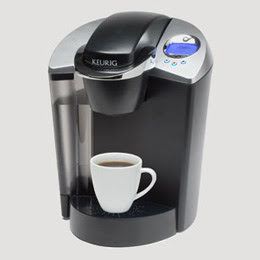 We've used it for a week now, and we absolutely LOVE it. It's so much easier for both of us to grab a quick cup of coffee before work; we don't have to wait 30 minutes or more for it to brew, and we don't have to smack its side if it stops brewing mid-cycle (that's what our old coffee maker was doing, despite being cleaned out with vinegar twice -- like I said, last legs), nor are we pouring cold, unused coffee down the sink if we made too much.

Whenever one of us needs a quick hit of caffeine (well, Collin more than me, as I try to limit myself to a cup a day while pregnant), we can make a hot, perfect cup in about a minute. No fuss, no muss, and no old, yucky, messy coffee grounds to throw away. (Have I ever mentioned the time Violet fished an old coffee filter out of the garbage and threw it on the floor, and wet coffee grounds got EVERYWHERE?)

We also bought some hot chocolate and chai latte pods so we don't OD on too much caffeine in the evenings.

It's been a fantastic investment so far. I love taking good coffee to work in the morning (as opposed to the mediocre stuff in the breakroom).

So, yes. Here ends my commercial pitch, and I promise that I'm not getting any kickbacks from Keurig or Sam's Club. :)
at August 06, 2011

Email ThisBlogThis!Share to TwitterShare to FacebookShare to Pinterest
Labels: coffee