1. I'm up way too late because I'm packing a suitcase for Collin & Violet. Tomorrow they fly to Fargo, ND to attend Collin's cousin's wedding. (Too expensive for all of us to go, but Violet can still fly as a lap baby, so...)

2, I've never been separated from Violet overnight before, and it's hard. I know she'll be in good hands, but... but. She's my baby. (I'll miss Collin too, of course... but I've left him overnight before so it's not quite as hard. :P)

3. I had to say goodbye to her already because she'll still be sleeping when I leave for work tomorrow. They'll return late Monday night. Please pray that they have a safe trip, and that Violet behaves as well as an 18-month-old can in those circumstances.

4. Okay, I need to talk about something else or I'm going to start sobbing. Let me tell a couple of fun stories from our vacation.

5. When we arrived at the San Diego zoo, it was early afternoon the Sunday of Labor Day weekend. The parking lot was literally overflowing with cars. We circled the lot for 30 minutes but had no luck getting a space. I remembered reading a blog post about St. Boniface being the patron saint of getting a parking space (really!) so I began silently asking him for his intercession as we continued to circle the lot.

About five minutes after I started to pray, we caught sight of a car pulling out of the second row of the parking lot, and we managed to claim it. Thank you, God, and thank you, St. Boniface. It's nice to have friends in high places!

6. On Labor Day evening, the kids and I returned to the hotel around 8pm because we were all exhausted (Collin came with us, but planned to return to Disneyland for a few more hours once we were settled). After Collin left, I was flipping through channels to try and find something the kids could watch. As it was late evening, I couldn't find anything very kid-appropriate, not even on the Disney channel (one of the Hannah Montana-type shows was on, YUCK). As I flipped through again, I caught sight of a familiar image: 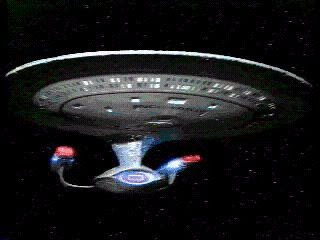 Elanor immediately said, "Oh, yes, the spaceship show. Let's watch that." So we did. It was a very, very proud moment for me. (The episode, for the Trekkies out there, was Timescape.) It was Star Trek: The Next Generation -- literally!

7. William absolutely loved seeing the pandas at the Zoo. A few days ago, while we were in the van driving home from daycare, he told me the following: "We saw a panda eating bamboo when we were at the San Diego Zoo. Pandas eat bamboo. We saw a panda sleeping, and another panda eating a lot of bamboo! Pandas are bears. Some bears eat children, and that's just rude."

I laughed until I nearly cried at the last line. (I have no idea where he got the "bears eat children" line from... probably his dad, I'm guessing. :P)