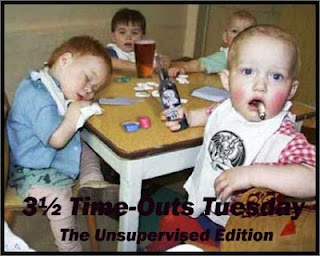 I had a thought while listening to an episode of Catholic Answers Live the other day. The host and guest were discussing the "wrongful birth" court case that was recently decided. I think that the doctors' attorneys would have won the case if they had asked the parents if they had ever given their daughter a birthday party. If their answer was yes, then it raises the question of why they bothered to celebrate what they believed was a wrongful birth? And if the answer was no, I think that would show the court and the world just what kind of parents they were to that poor child. In my opinion, the best decision in this situation would have been to terminate the parental rights of the couple who were so burdened by the gift of their daughter, and give her to a new family who would love and cherish her for the miracle she is.

My friends Luisa, Rachel, Michelle and I went out for a bite to eat after the Phoenix Catholic Women's Conference (which was AWESOME!). As we were waiting outside for our table, a lady sitting next to us made a comment about how cute Gabriel was, how she was seeing babies everywhere and wished she could have another one, but she'd "gotten fixed." I was in a pretty cheeky mood, still flying on the great spiritual high from the conference, so I commented, "Were you broken?" Her reply was, "No, but my husband thought I was." She suddenly looked so sad. I felt terrible for her. How is that any kind of marriage if your husband thinks you're broken and encourages you to mutilate your internal organs so he'd be happy? And really, there but for the grace of God go I. I'm sure if we'd have stayed Lutheran, Collin would have eventually gotten a vasectomy or I'd have gotten sterilized.

So, Babette Josephs apparently believes that I am a "man with breasts." I have to say, this is the first time I've ever been tempted to send a picture of my genitalia to someone. Dear Ms. Josephs, is it so hard to realize that women are in favor of ultrasound bills because they love women and want them to have fully informed consent before making an irrevocable life decision? Perhaps you should actually listen to the testimony of women in favor of these bills -- women who did NOT have informed consent and suffered because of it.

Also, I was very offended by Ms. Joseph's comment! President Obama, I expect your phone call by the end of the day.

To whom it may concern: I do not have "the perfect family" just because I happen to have an even number of boy children versus girl children. I have the perfect family because we live, laugh, love, and grow in holiness together -- and that is something that will not change no matter how many children we have.

Visit Acts of the Apostasy for more Time-Out Tuesday posts!
at March 27, 2012