How Does the Church Control Me?

Jill Stanek featured the following at her blog today: 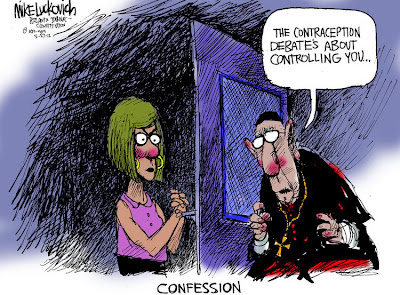 Mr. Luckovich, how, exactly, does the Church control me? If I want contraception, there are three stores within a mile of my house that sell condoms and have pharmacies that dispense the Pill. That doesn't include the Wal-Mart less than three miles away, where I can purchase hormonal contraceptives at $10 for a 90-day supply.

The Church does not physically prohibit me from going to these stores and availing myself of said contraception, nor does she prohibit me from visiting an OB-GYN and obtaining a prescription for same. I don't have Swiss Guards standing at my door and following me around whenever I leave the house, making sure I don't buy contraceptives.

If the Church is trying to "control" women with Her teachings on contraception, She's failing pretty miserably. Granted, the statistic that "98% of Catholic women use contraception" has been proven false, but there's still an abysmally high number of women who self-identify as Catholic that also use contraception.

I think Mr. Luckovich needs to consult with his colleague, Dana Summers. She has a more accurate viewpoint: