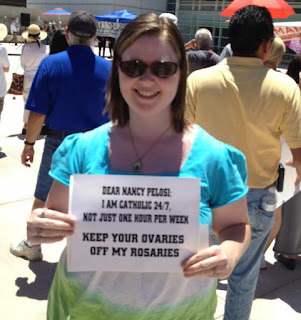 I read your blog post titled History Is On Our Side: Why the Federal Contraception Rule is Constitutional.

As a Catholic, a woman, and an American citizen, I was grossly offended by your assertions about my faith, my life, and my ability to participate in American society.

You assert the following: Access to contraception is crucial for women’s equal participation in society.

False. I have not used contraception since 2003 and I participate fully and equally in society. I have a Bachelor of Arts degree in English with a minor in technical communication, and I work full-time in my field (and have done so since 2003). I also have four children, ranging in age from seven years to eight months. I vote in every election, primaries included, and stay informed regarding political events.

You assert the following: Controlling whether and when to have children has had a direct effect on women’s ability to make their own paths in terms of their schooling, careers, their families.

Absolutely, and there just happens to be an excellent way for a woman to control her childbearing -- it's called controlling when and with whom she chooses to engage in sexual intercourse, since sexual intercourse is the biological act intended to create children.

In other words, the Catholic Church, affiliated organizations, and Catholic business owners must be forced to violate their beliefs and their consciences so that men don't have to take equal responsibility for the choice to engage in sexual intercourse, and you call that "gender equality." How is that remotely logical?

Finally, you give a laundry list of cases where the court ruled against religious freedom, and all of your examples cited discrimination based on gender or race. You end your list by saying the following: Fortunately, in all of these cases, the court rejected the claim that religious beliefs can trump anti-discrimination laws.

You have failed to clue into the fact that discrimination based on race or sex is unjust because it is based upon one's inherent state of being. Discrimination in the context of recreational birth control is entirely just, because it's discriminating based on a desire to engage in a voluntary behavior, not on a state of being. The Catholic Church refuses to pay for contraception for everyone -- man, woman, child, gay, straight, black, white, etc., and She has every right to do so. Free exercise of religion -- which includes not subsidizing sinful behavior -- is a guaranteed right in our Constitution. Free birth control is not.

Moreover, there is a large, gaping hole in your argument -- the refusal of the Church to subsidize contraception does not inhibit access to contraception. Condoms are available at the dollar store. Inexpensive contraception can be purchased at Target or WalMart for $4/pack. Drugstores all across the country carry contraception available for purchase. Abstinence and NFP are free or very low cost. The county health department and other organizations -- one of which the government keeps throwing money at for this express purpose -- reportedly provide free or inexpensive birth control.

No one is forced to work for a Catholic employer in the event that s/he is unwilling to take responsibility for his/her own sex life and wants their employer to subsidize it for them. And yet you claim I can't equally participate in society unless I not only use contraception, but force religious institutions to pay for it as well?

I am a Catholic woman who assents 100% to the teachings of the Catholic Church. I am an American woman and a working professional with a college degree. I am a married woman who has been pregnant six times and has four beautiful children here on earth. I am a woman who has taken control of her own fertility, and who takes responsibility for her own sexual choices.

Finally, I am a woman who will fight the HHS mandate with every breath of my body and every fiber of my being because I loathe and resent your pandering condescension. You claim to stand for civil liberties, but you degrade and insult every single woman in this country -- especially those who take responsibility for their own sexual choices -- when you insist that we can't possibly participate equally in this society unless we become exactly like men. That was not the goal of feminism, and never has been.

I can participate equally in society while retaining both my femininity and my fertility, and I can do it without forcing anyone to violate their religious beliefs. You would do women a much greater service if you helped them realize their potential to do likewise instead of telling them that they can't possibly participate equally in society unless they pretend to be men.

P.S. I had a different word in mind for the title of this blog post, but restrained myself. You're welcome.