For those of us working outside the home when we'd rather be at home with our kids...

"O Lord, since I must now entrust my precious child into the arms of another so that I may go forth to earn bread for our table, accept my offering of tears and deep regret.

Take my child, Lord - and my aching heart - and lay them together in your dear Mother's lap where both may rest secure until I come again to claim my treasures.

from "Prayers to Form a Mother's Heart" produced by the Women's Apostolate to Youth, accessed online here.
at August 26, 2013 3 comments:

I took a leaf out of Kara's book and created an ExpectNet.com guessing game for Tiebreaker's arrival. (She won Gabriel's game, so we'll see if she can go two for two!) Winner gets bragging rights. :)

Speaking of, allow me to indulge in a short, shameless brag:

William took the DIBELS reading assessment at school this week. The benchmark composite score was 23 and he scored a 60. Yes, I know that assessments and test scores and whatnot aren't necessarily an accurate gauge of learning or retention, but still. After years of IEPs and so forth with Elanor, it's a pleasant change of pace to have a child who scores above average on reading tests.

We had a fantastic time at the Children's Museum of Phoenix last Saturday! What a fun place. Gabriel was simply bowled over by the fact that he could run around and do pretty much anything he wanted without being constantly told not to touch anything. They had a room just for kids 3 and under, and he probably spent an hour climbing up the stairs and going down the slide.

The kids barely stayed still for more than two consecutive seconds for the entire time we were there, but I managed to get a few pictures:

As you can see, we habitually read the classics at bedtime.

I love these guys. (Gabriel was already in bed so he didn't get in the picture.)

I'm a little stressed with finding a new doula. Originally we'd planned to hire the doula I had at my last two births. I e-mailed her in January, soon after getting the positive test, and she responded enthusiastically to my request to be my doula again. We e-mailed back and forth for a few weeks, and she told me she was having car troubles and could let me know a good time to meet so we could sign the paperwork and pay her deposit.

Since then, I've heard nothing. My e-mails have gone unanswered, and so did the message I sent via LinkedIn. The only phone number I have for her has been disconnected. I'm 34 weeks on Tuesday, and I've had two babies at 36-37 weeks before, so I'm running out of time.

Sigh. I did not need doula drama this late in the game. Collin and I will probably be okay our fifth time around the block, but still... it makes me feel so much more relaxed to have someone there to help him help me.

No big plans this weekend. We're still recovering from last weekend. I hope yours is more exciting. :)

No quick takes today because I spent the evening working on an informational post for The Clubfoot Chronicles, summarizing the most helpful resources I've found so far.

It wouldn't have taken nearly so long to compile if four little rascals who shall remain nameless had been a little less rambunctious, but alas, they were in top form tonight. I didn't want to wait until after bedtime because I was afraid I'd fall asleep at the keyboard if I tried. Third trimester fatigue in all its glory...

Speaking of, I had a prenatal appointment today and it was very boring. BP was good, Tiebreaker's heart rate was 136 bpm, and I'm measuring right on target (I almost asked her to measure again because I feel gigantic, but the midwife assured me that her measurements were correct).

Tomorrow is a rare Saturday that Collin has off, so we're taking the kids to The Children's Museum of Phoenix, a place we keep intending to go but never have. Should be a fun time!

On Sunday, after Mass, Collin and I have a date! We're dropping the kids off at their aunt & uncle's place and going on a short jaunt to a local casino with our parish's Knights of Columbus group.

Email ThisBlogThis!Share to TwitterShare to FacebookShare to Pinterest
Labels: ramblings

Collin and the kids had a good time camping last weekend, despite the torrential rainstorms that plagued their campsite. The kids helped set up the tent and were very proud of their work. (William brought his gun so as to defend the campsite from any wandering bears.) 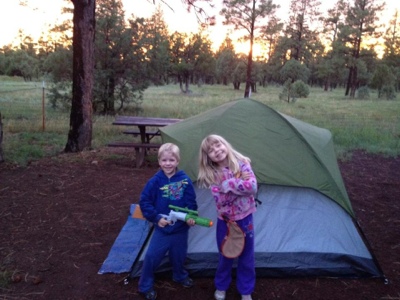 Unfortunately, on the way home, Collin stopped at a scenic overlook to show the kids the scenery and somehow managed to nearly tear the front bumper off the car. (There was a piece of metal sticking out of the concrete barrier at the end of the parking space, and it caught on the bumper as he was backing out.) The bumper was dragging on the ground so he couldn't drive it home and had to call a tow truck.

After the first towing company changed their minds about going to get him (half an hour after they said they'd be there -- apparently the employees were unable to LOOK AT A FREAKING MAP when they accepted the job and didn't realize how far it was to our house), he called a second company and they towed the car home. The kids weren't in bed until 11:30pm (the night before school started...) but at least everyone got home safely.

We had the car towed to a body shop on Monday, and we should (hopefully) get it back tonight. 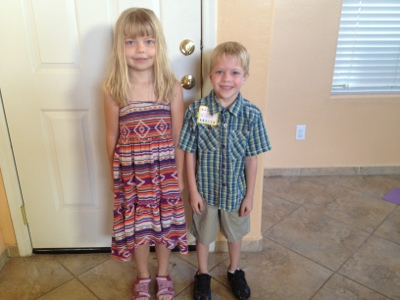 They both had a GREAT first day!

After I took the requisite "first day" photo, Elanor asked if Violet and Gabriel could be in a picture too. I was pleased with the result -- all four are looking at the camera and only one is sticking out her tongue (quintessential Violet). 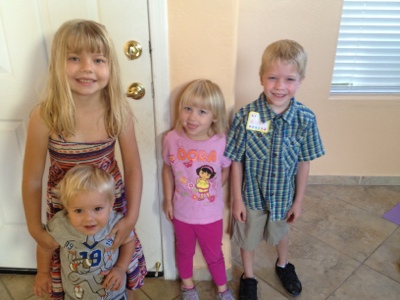 Last night I met up with Leila! She bought me supper and we talked for 2+ hours non-stop (we could have talked longer, but the restaurant was closing so we had to leave). It was so much fun! 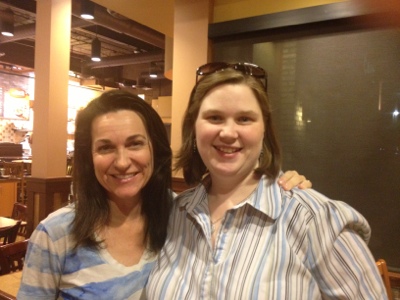 Yesterday was also my long-awaited appointment with the only Ponseti-certified pediatric orthopedist in Phoenix, Dr. Lee Segal at Phoenix Children's Hospital. My appointment time was 4pm but I didn't see the doctor until past 5:30 - there was some sort of emergency so all the appointments were running behind. (Would have been nice to have been informed of that EARLIER, but oh well.) The staff was very apologetic - the nurse kept checking in on me and offered snacks and bottled water.

Overall, I was very pleased with both Phoenix Children's Hospital and Dr. Segal. He was very personable, knowledgeable, and reassuring, and assured me that they were very strict about following the Ponseti protocol to the letter. I feel that Tiebreaker will receive excellent care, which is a relief.

In related news to #6, I've started a new blog! Introducing...

I wanted to create a more focused blog for Tiebreaker's journey, to make it easier for other parents dealing with clubfoot to find. It's pretty basic at the moment and I only have one post up so far, but I hope to get several more posts up this weekend.

Ahhhhhhh, so glad it's Friday. This has been a long week. Tiebreaker has developed an affinity for jumping on my bladder in the middle of the night, sigh.

We had "Meet the Teacher" night last night and met Elanor's teacher and William's teacher, saw their classrooms, etc. William is SO excited to start school on Monday - he didn't want to leave! We liked both of their teachers, and Elanor's teacher was already familiar with her IEP - she offered to meet with us prior to the initial IEP meeting to discuss any concerns, and it was a good sign to us that she took the initiative to do so.

I had a prenatal appointment today and met with the new midwife! She was great. I hope she's on call when Tiebreaker is born. :) There's another midwife starting in mid-September and she may be on the call rotation by then as well.

Things look good baby-wise - I'm measuring on target and Tiebreaker's heartbeat was 138. I've also gained a few pounds, which is a change of pace - I'm almost back up to my pre-pregnancy weight.

I meet with the Ponseti-certified pediatric orthopedist next week to discuss Tiebreaker's treatment plan. Originally we were trying to figure out a way for Collin to be there as well, but, logistically, it's just easier and less expensive if he stays home with the kids while I go by myself. (The hospital is only 15 minutes from where I work.) I have a list of questions that I've been working on for the last two months.

After I meet with the orthopedist, I'm going to try and meet Leila for coffee (again; we've had to cancel twice so far). Maybe the third time will be the charm...

Violet managed to find a pair of scissors last week. She cut off a chunk of her little brother's hair (thankfully, it doesn't look too bad; he probably wouldn't stay still long enough for her to do any real damage) and then gave herself a mullet. Oh well, it's just hair and it'll grow out.

Collin and the older two kids are camping this weekend. I talked to Collin a little while ago and it was raining buckets, and he was trying to decide if they should try driving elsewhere instead of trying to set up camp in the rain. My vote was for them to find a hotel instead, but he promised the kids camping so he's going to try and deliver. Pray for them!