** This is a sponsored post.  I have been compensated with product from this company in return for a full and honest review.  All opinions herein are my own.**

Recently, I was contacted by The Nativity Stones and asked if I'd like a free necklace in return for blogging about their products. I love jewelry, so I was intrigued, and I went to their website to read more about their products. They have such a fascinating story! Each necklace contains an actual stone excavated from the Cave of the Nativity in Bethlehem -- which Tradition says is the birthplace of Jesus -- in 1963. A portion of the proceeds from the sale of Nativity Stones’ jewelry and gifts are donated to worthy charities each year.

The necklace arrived several days ago and it is beautiful. I received the Classic Nativity Stones Cross: 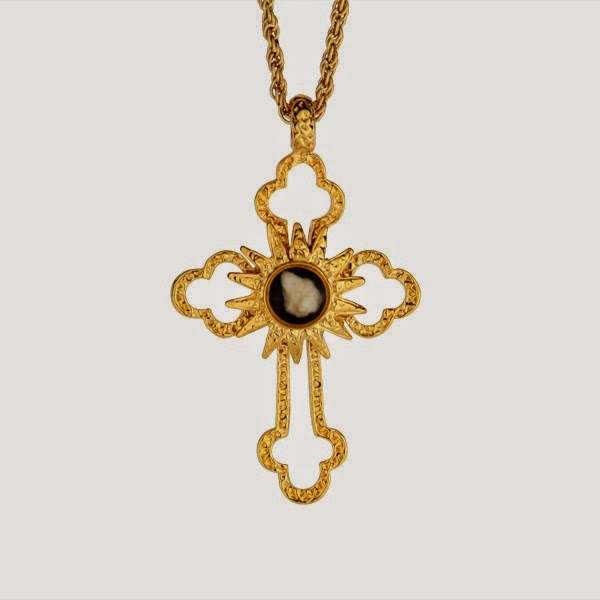 The cross measures 1-3/8"x 7/8", came with a 22" chain, and is layered in 18k gold. I love the sunburst detail around the stone, and I like how each of the cross edges have three joined arches, suggestive of the Trinity, or maybe the Holy Family (or both!). The stone inside, as the picture shows, is not merely a tiny chip but a sizable pebble. 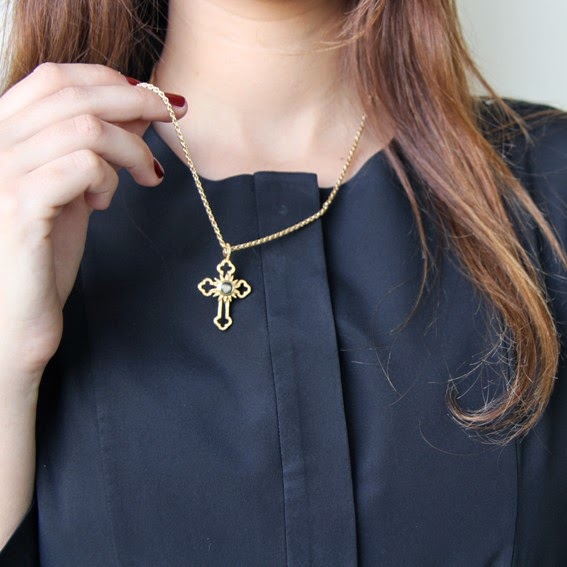 The cross has a lovely design that is also unisex. It'd be an excellent ordination gift for a priest or deacon, or as a gift for a religious sister who is professing her final vows. These necklaces would also make very meaningful Christmas gifts, but they would be wonderful choices for any significant spiritual event in the life of a godchild - Confirmation or Baptism, for example. They would make a very special Mother's Day gift as well.

The Nativity Stones has very generously offered my readers a discount on any of their necklaces as thanks for reading this review. Use the code STAR15 in their online store to receive 15% off! Be sure to like them on Facebook as well.
at March 31, 2014 2 comments:

Yikes, it's been a while since I posted. Busy, busy!

We had parent-teacher conferences for Elanor & William this past week, and got positive reports for both of them. Elanor in particular has exceeded many of the goals on her IEP, and William's work is above average in all areas. We're so proud of them! 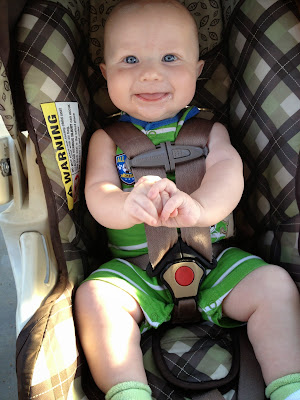 I had such a wonderful time at the Phoenix Catholic Women's Conference last Saturday! Peter had fun too; he was adored by all and babbled happily throughout. Here he is hanging with Luisa: 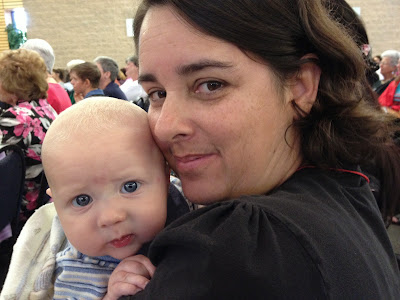 Plus, I met Teresa Tomeo and got her autograph (I purchased her book, "God's Bucket List"): 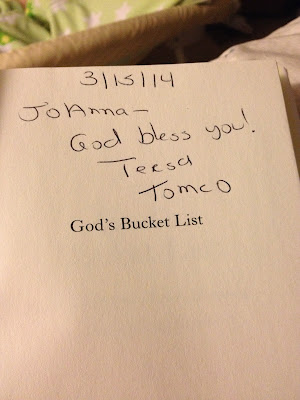 Afterwards, I went out for supper at Chili's with Luisa and two other friends. This is the delicious pineapple-blueberry margarita I enjoyed: 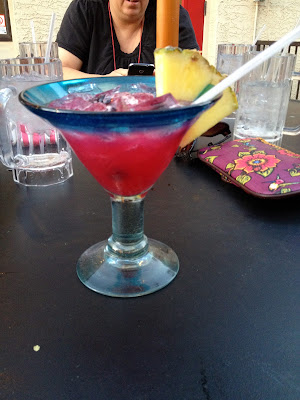 Collin goes to the Catholic Men's Conference tomorrow. I pray he has an uplifting day!

It's World Down Syndrome Day! I'm wearing my striped socks in honor if all the great people who rock that extra chromosome. 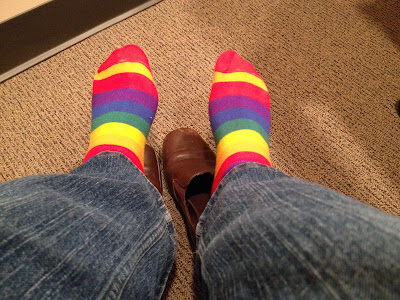 Violet turned 4 years old on Wednesday! We celebrated with dinner out the night before, due to her birthday falling on Ash Wednesday. I remember that she was born during a Friday in Lent, and our priest joked that we named her after the liturgical color. :)

Peter is five months old today, and we have less than one week until he starts nighttime brace wear only!

I'm actually taking all of next week off of work since the older two kids are on spring break. It's cheaper to take the vacation days then to pay for full-time daycare for them. The younger three are still going to daycare, though, so I'm hoping I can use the toddler-and-infant-free time to catch up on the laundry, and get some other things crossed off my long-neglected to-do list. I do plan to spend some quality time with Elanor and William as well. I want to take them to The Lego Movie, for starters.

Funny story from Ash Wednesday Mass that my Catholic friends will appreciate. We sat next to a middle-aged couple, and after Mass the lady turned to me and said, "You have a beautiful family! By any chance, did you graduate from Franciscan University of Steubenville?"

"Oh!" she said, looking a little puzzled. "It's just that all of the women I know with big, beautiful Catholic families have graduated from there."

Then I told her Collin and I were both converts from Lutheranism and her jaw dropped.

I need to get a T-shirt that says, "People think I graduated from FUS."

In case you missed it, I wrote an article for SecularProLife.org, which was published here.

I also had a (sarcasm-laden) article published at Catholic Stand, here.

What a small world it is. I'm signed up for an online service that matches potential carpool partners based on their home and work locations as well as their work schedules. I received an e-mail from one such potential partner the other day, asking if I'd be interested, and she mentioned that she'd moved to Arizona from North Dakota about a year and a half ago.

I told her that I'd moved here from ND as well, and it turned out we're both from the Fargo area and have friends in common. How funny is that? We're going to meet next week and see if we can hammer out a carpooling schedule. I hope it works out; it'd be nice to have some help with the commute occasionally.

Hope your Lent has been fruitful so far! I'm going to try and make it to Confession this weekend.

Some shameless self-promotion...
I wrote an article for SecularProLife.org, which was published this morning here: http://blog.secularprolife.org/2014/03/what-wendy-davis-political-doublespeak.html
And reprinted by LifeNews here:
http://www.lifenews.com/2014/03/03/wendy-davis-would-be-okay-if-club-footed-babies-like-my-son-are-aborted/
at March 03, 2014 No comments:

Collin and I went hiking at the Spur Cross Conservation Area in Cave Creek, AZ today! The path was muddy due to the rain yesterday, and the creeks were impassable, but we had a good time nonetheless. Peter came along but the rest of the kids spent the day at their aunt & uncle's. 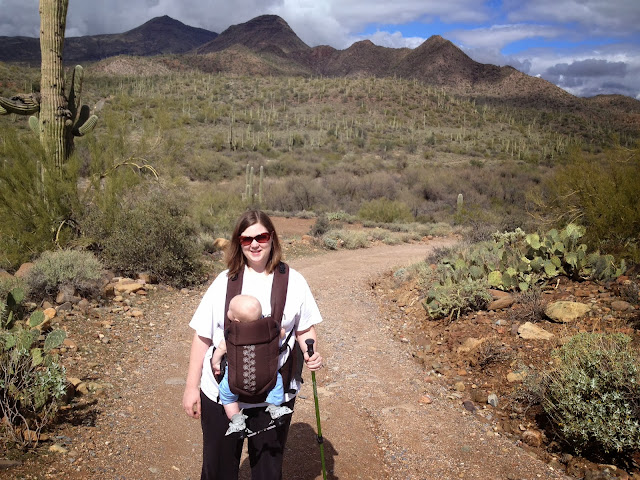 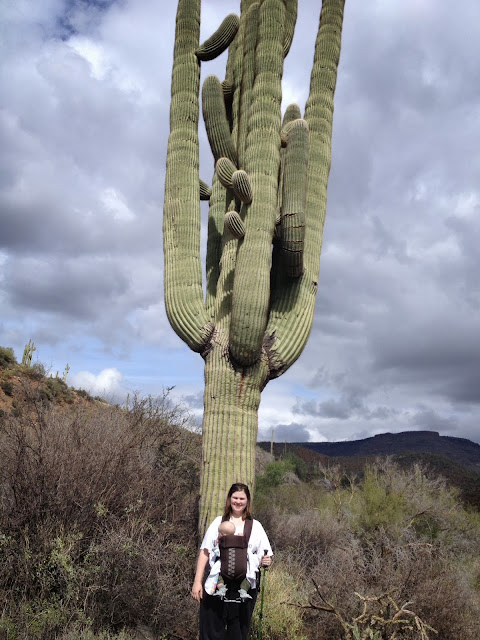 That's not an optical illusion - that sugaro cactus really is that huge. 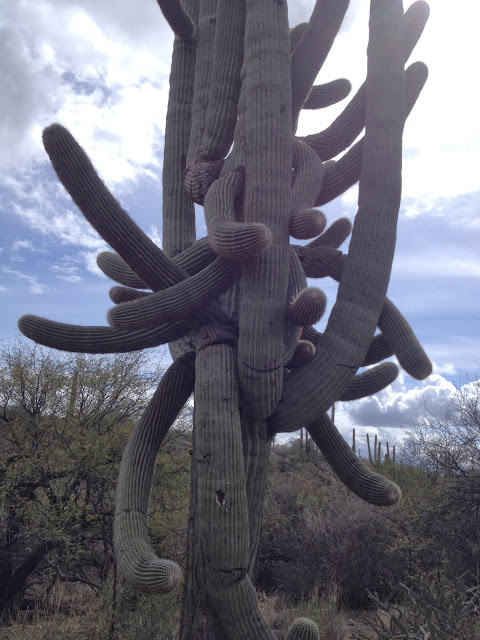 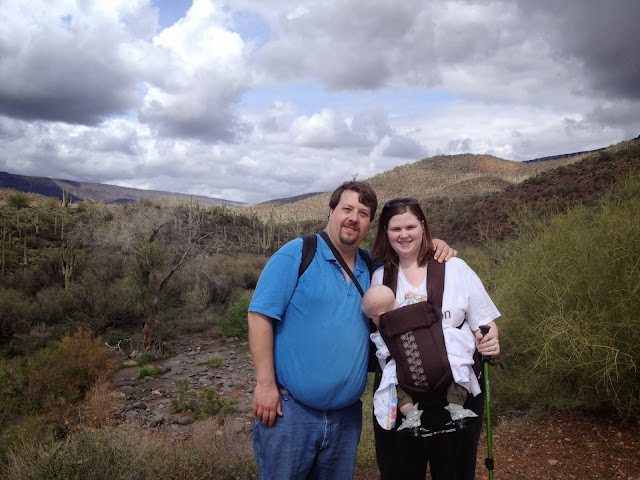 Email ThisBlogThis!Share to TwitterShare to FacebookShare to Pinterest
Labels: 7I7, Hiking

William requested carrot cake for his birthday cake. So, I found a recipe on Pinterest and baked one for him - from scratch. (The frosting was out of a can, though - I had some I wanted to use up.) His response?

I brought the rest of the cake to work on Wednesday. At least my coworkers enjoyed it. (Collin and I thought it was pretty good, too.) Next year I will just go the easy route and buy a cake, since he doesn't seem to appreciate my efforts to make one.

He did like The Avengers candles I put on it, at least.

Also, as an addendum to my last post, it turns out that the HD version of Frozen is available now, so Violet will get it for her birthday after all! Yay! And after Wednesday, birthday season will be over until October, when we will celebrate Peter's first birthday. Whew.