Catholics for Choice Killed a Strawman

Remember my post about Catholic Butts? One of the smelliest derrieres out there is the oxymoronic Catholics for Choice. 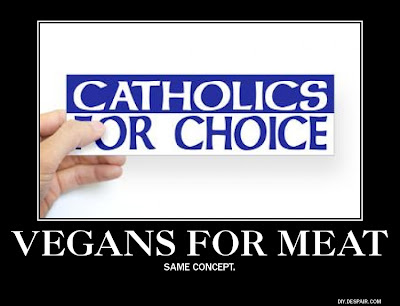 She provides no evidence, other than "because the ACOG says so," to support her assertions. What's interesting is this article from the American Journal of OB/GYNs stating that over half of OB-GYNS who responded (57%) believe that life begins at conception. Only 28% believe pregnancy begins at implantation (16% weren't sure, apparently). It seems that ACOG's official stance doesn't necessarily reflect the beliefs of most OB/GYNs! Imagine that.

She makes no mention of when human life begins. If she believes that life begins at implantation, and not conception, there's a wealth of scientific evidence to the contrary.

She also makes the ludicrous claim that she and her husband, both intelligent scientists, had an inordinate amount of difficulty grasping the difference between "user failure rates" and "method failure rates" when comparing NFP to contraception. I'm a woman of average intelligence with an English degree, and I didn't find the concept that difficult to comprehend. Moreover, she provides no evidence to support her claim that the 99% correct use efficacy of NFP is "a lie." (It's not.)

There is also no discussion whatsoever about the moral aspect of contraception, abortifacient or otherwise. I doubt she's ever heard of Theology of the Body. She seems profoundly ignorant of the fact that Catholic Church teaching on contraception does not rest on the premise that hormonal contraception is abortifacient, but rather that contraception of any type violates the integrity and sanctity of the marital act.

In my opinion, this was the most tragic part of the entire essay:


I plan on going to confession and hearing the priest out. And unless he flatly forbids it, I also plan on taking Communion. Because I am morally sure, in my heart, that for me, this is the proper decision.

Truth is not founded upon the feelings in one's heart. Otherwise all manner of evils could be justified (for example, what if a woman feels morally sure, in her heart, that her adulterous affair with her married lover is the proper decision?).

Let's pray that this woman finds a holy and orthodox priest who will guide her to the Church's teachings about a fully informed conscience and the intrinsic moral evil of contraception.