Hosted by Jen at Conversion Diary.

We've bit the bullet and are putting the kids in a new daycare, starting Monday. We love their current daycare, but it's just too expensive. Their new daycare is in the home of a lovely lady named Margie. She has 20+ years of childcare experience, is charging us $200/week less than our current daycare, and will take the kids when they're sick. Both Collin and I have had to miss a lot of work when the kids were ill, so that last bit is huge. I'll probably cry today, saying goodbye to all of our friends at our current daycare, but the extra $200 per week will help us a lot.
photo credit

We really need to get a better handle on housework. We did really well for a 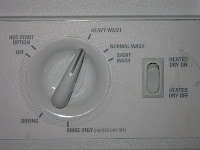 while, but then both Collin and I got sick at the same time (him with samonella, me with a UTI) and we let things slip. We've also been pretty busy on our days off the last few weeks, and that hasn't helped. We're having company over the Fourth of July weekend (my best friend, Rose, who's currently working on her Master's degree in Flagstaff, AZ), and I'm hoping the motivation of company will get my butt in gear for a cleaning binge this weekend.
photo credit
--- 3 --- 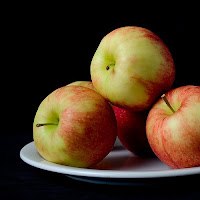 I heard something humorous while listening to EWTN's Mother Angelica Live Classics podcast today. She told a story about a cardinal who was at some sort of state diplomatic function, and the lady seated next to him at dinner was wearing a gown that was quite low-cut. When the dessert course came around, the cardinal picked an apple out of a fruit platter and handed it to her. The lady inquired, "Your Eminence, why did you give me an apple?" He replied, "When Eve at the apple, she realized she was naked and felt ashamed. I was hoping it'd do the same for you."

Boy, what I wouldn't give to be able to do that to some celebrities who wear next-to-nothing!
photo credit

I really, really want to see the movie Up. Everyone I've talked to who has seen it giv 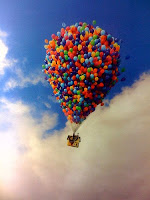 es it rave reviews. We were hoping to go this weekend, but we may wait until next weekend instead, since I get paid on Wednesday.

Speaking of Pixar, we recently purchased Wall-E and Ratatouille. Elanor has been watching Wall-E via Netflix instant view for the past few weeks, and she loves it, so we decided to add it to our DVD collection. Ratatouille was on sale so we picked that up as well. I've only seen parts of it, and Collin hasn't seen it at all, so we're looking forward to doing a family movie night this weekend. Another movie on our list to see, thanks to Wall-E, is Hello, Dolly! That one is available to see via Netflix instant view as well, so maybe we'll end up watching that one too.

We're flying to North Dakota for a visit on July 11. I'm looking forward to the trip, but at the same time I'm halfway dreading the flight. Neither Elanor nor William have ever been on a plane before. Thankfully it's a non-stop flight. It'll be nice to see family members whom we haven't seen since we left in October, and catch up on all the news. We fly back to AZ on July 15.

William just turned 16 months yesterday. He is so close to walking unassisted. He can get himself into a standing position without help, he walks along furniture and pushes toys, but he hasn't taken that first unassisted step yet.

His newest words are "cow" and "hello" (heyyo!). He's quite the little talker, much more so than I remember Elanor being at this age. He also has learned what the DVD player does, and will bring me a movie while pointing at the DVD player. Such a smart boy! He's growing up so fast.

Collin's dad, Keith, was in town for a visit last week; he and Collin spent the day after Father's Day together. They went out shopping, and Keith bought us a brand-new TV/DVD player for our bedroom! We've been wanting one for a while (as that's where I keep the kids on Saturdays when we're in the house, since Collin's working). We've been making do with Collin's computer, but it's a pain to lug it back and forth from the office to the bedroom (even though it's a Mac and easy to transport, since it only has one cord and no tower to deal with). When Keith heard that we'd been moving the computer back and forth, he insisted on buying us a TV/DVD player for the bedroom. I have an incredibly generous father-in-law!!
at June 26, 2009