I want to know if antis REALLY don't understand that abortion is not surgery, or if they're just pretending not to.
— Jane Doe, MD (@DrJaneChi) July 17, 2013

I found the irony of an (alleged) doctor claiming that a surgery was not, in fact, a surgery, too difficult to resist and decided to reply.


@DrJaneChi A D&C is not surgery? That's not what my OB said. Why was I given general anesthesia for a non-surgical procedure, then?
— JoAnna (@astarofhope) July 17, 2013


[For anyone unaware, I had a D&C in 2006 for a missed miscarriage. At the time of the diagnosis I was twelve weeks along, but the baby was only measuring 7w6d.]

@astarofhope Convention, & so they didn't have to worry about your discomfort, & bc insurance will pay for it.
— Jane Doe, MD (@DrJaneChi) July 17, 2013 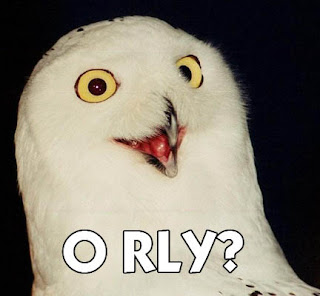 Apparently she's under the impression that a D&C is only classified as a surgery so insurance companies will pay for it. Does that make zero sense to anyone else? There are plenty of necessary non-surgical procedures for which insurance pays. Classifying a D&C as a surgery if it's not one shouldn't make a difference.

I questioned her further:

@DrJaneChi Did my OB lie to me when she said it was a surgery? Why did it take place in the OR, in the day surgery unit?
— JoAnna (@astarofhope) July 17, 2013


Now she changes her mind again. Apparently it's the instruments involved that make something a surgery.


@astarofhope Abortion is not a dilation & CURETTAGE. It uses a plastic cannula, not a sharp metal curette.
— Jane Doe, MD (@DrJaneChi) July 17, 2013


I guess if I stab someone to death with a scalpel, that's a surgery too?


.@astarofhope An in-office aspiration (no curette) is an alternative for miscarriage management to an operative D&C.
— Jane Doe, MD (@DrJaneChi) July 17, 2013


Oh, so now "operative D&Cs" are in fact surgeries, but ones done "in-office" with a curette (what happened to the cannula she spoke of above?) is not.  I press her again:


@DrJaneChi What definition are you using to define "surgery"? It doesn't seem to be this one: http://t.co/KIaEz5xfIU
— JoAnna (@astarofhope) July 17, 2013


But of course she finds reasons to nitpick that definition:

By that definition, a colonoscopy, a colposcopy & an IUD placement are also surgeries. @astarofhope
— Jane Doe, MD (@DrJaneChi) July 17, 2013


Sadly, I have to explain to this "doctor" that she's mistaken:

@DrJaneChi The first 2 are diagnostic procedures, not treatment. An IUD is not a treatment, either. So none fit the definition I provided.
— JoAnna (@astarofhope) July 17, 2013


And throw in some more actual facts:


Note that the previous link provided to her is from a website called "The Surgery Encyclopedia."


She never tweeted me again after that, nor did she ever own up to her lying.

Moral of the story? Usually when abortion advocates claim that pro-lifers are lying, the exact opposite is true, and it's not very difficult to catch them at it. None of them will ever admit that they're wrong, of course; the MO is to ignore you, block you, or call a posse of their friends to start spamming your Twitter feed with idiotic insults -- all of which only further serve to illustrate that their side is losing. We have science, logic, and reason on our side, and they don't.
at July 31, 2013