How an Arizona Transplant Figured Out Lefse-Making

Lefse-making was always a big deal in my house when I was growing up. My mom would invite a houseful of relatives over, and the kids would run wild as the adults riced twenty pounds of potatoes and made hundreds of batches of lefse. Sometimes we'd have two or three lefse grills going at once. As the kids got older, we were allowed to help rice the potatoes. Then, we were promoted to moving and turning the lefse, which was a BIG DEAL and took a lot of practice to get right.

After I moved to Arizona, I missed lefse so much. It's not something you can buy locally (and really, once you've been raised on the homemade stuff, the store-bought lefse is just no comparison). My mom would FedEx me some packages from time to time, but that was a tricky proposition given how perishable it is. She'd have to pay to overnight it, and that isn't cheap.

Last December, I read this NPR article about lefse, and it stirred up my longing all over again, and I bemoaned my lefse-less state on Facebook.

"Why don't you just make it yourself?" a friend asked me.

"I can't!" I replied. "I don't have a lefse stick or a lefse grill, not to mention a pastry board or a corrugated rolling pin."

But I was suddenly intrigued. Could I make it work, even without the "proper" equipment? Maybe... just maybe. I asked my mom for her lefse recipe and a few tips, and read a few pages on LefseTime.com. I took inventory of my kitchen utensils and made one purchase -- a decent potato-ricer (more on that below).

One evening, shortly after Christmas, I gave it a shot.

And it worked! I couldn't believe it!

Now you, too, can share in the joy of Norwegian-American cookery, because I'm detailing my process here, and explaining what substitutions I had to make in lieu of the proper equipment.

Here is some of the equipment you'll need: a potato ricer, a rolling pin, a pastry board or similar surface, a lefse grill or pancake griddle, and a long, thin stick to use to move and turn the lefse. A Kitchen-Aid mixer is also very helpful to have.

Peel potatoes and cut them into equal-sized chunks. 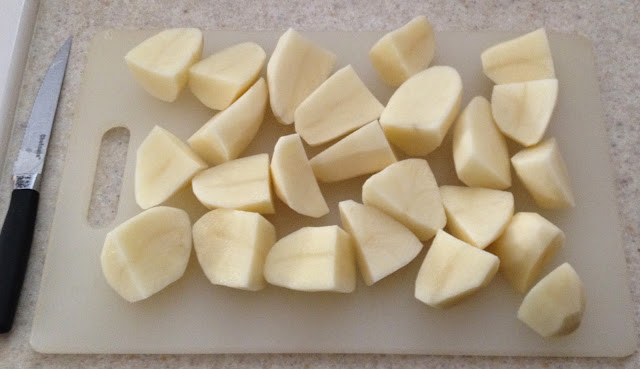 Place potatoes into a large pot of salted water and boil until they are tender (usually about 20-25 minutes).

Drain potatoes into a large colander. (Drain them well -- you don't want any excess water hanging around; that will make your potatoes too mushy.)

Now you get to rice your potatoes. For this step, a potato ricer is essential. I bought this one at Bed, Bath, and Beyond: 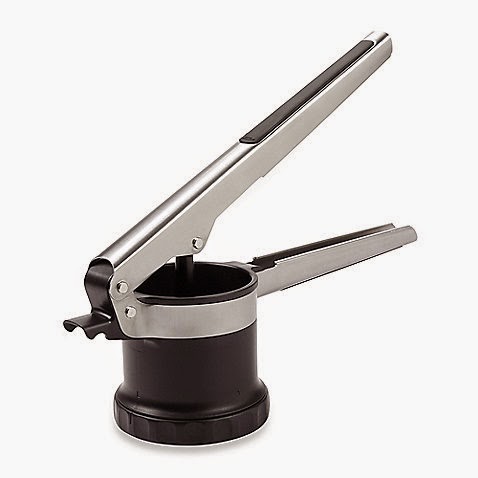 I like that it has three settings, but no removable disks (because I tend to easily misplace loose parts). Plus it's sturdy and will last a long time. I used one of those 20% off coupons I always get in the mail so price-wise it wasn't too bad.

Now, the ricing. Get a fairly large bowl to hold the riced potatoes in -- I use the bowl from my Kitchen-Aid mixer, since it's what I use to mix the dough after this step.

I use the "fine" setting on my ricer, which is the smallest one (the other two settings are "medium," and "coarse"), but if you only have a one-setting potato ricer, that should work too.

Ricing is fairly straightforward -- point the bottom of the ricer towards your bowl, use tongs to put a couple of chunks of potato into the main barrel and (slowly! hot potato spatter can hurt!) squeeze the handles together with both hands.

According to my mother, Grandma Hazel always said to "rice 'em twice." So that's what I do too -- when all the potatoes have been riced, I do it all over again. 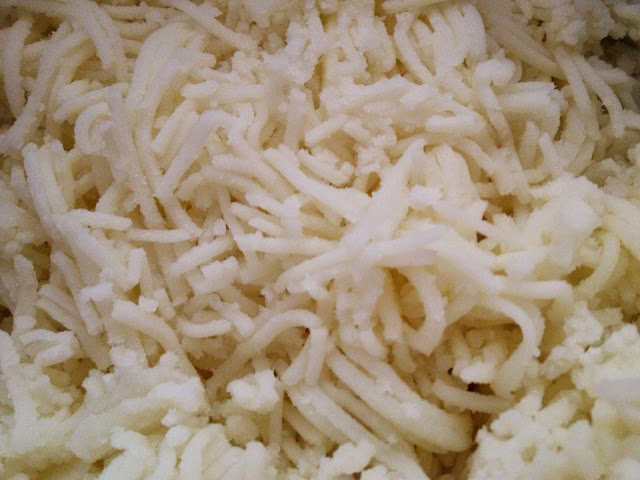 Once the potatoes are riced (twice!) add the 6 tablespoons of shortening. As stated, I use vegetable oil because that's what my mother told me to use. I've seen other recipes that use butter or Crisco solid shortening, and if you really want to go for the unhealthy factor, I imagine lard would work too.

Mix well (I use my Kitchen-Aid stand mixer), making sure the potatoes and shortening are thoroughly combined.

Now you have to wait until the potatoes are completely cooled. If you have the time, you can leave the bowl sitting out at room temperature for a few hours, covered with a dishtowel. Or, you can use the fridge or freezer (just make sure you stir the dough every half hour or so to ensure even cooling).

Once the potato mixture is completely cool, add the salt, sugar, and flour. Knead well (I use the dough hook on my Kitchen-Aid mixer). Add more flour if necessary - you want a slightly sticky dough, but not too sticky.

Now is a good time to preheat your grill to 500 degrees. My mother has a special Bethany Lefse Grill (as an aside: my little sister's name is Bethany, but I'm sure that's just a coincidence... then again, my mother really likes making lefse). 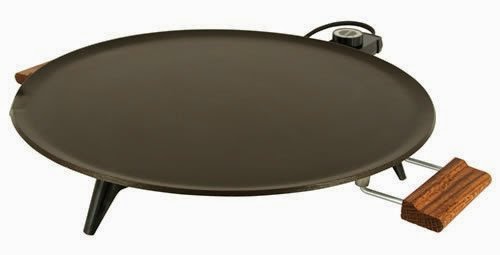 However, these fancy lefse grills run for about $100 a pop, so... needless to say, I don't have one. Instead, I use a pancake griddle - this one - which was a gift from my father-in-law:


I have to be careful not to make the lefse too big to fit the griddle, but as long as I keep the rounds small enough, it does the job.

Next, you get to make lefse balls! 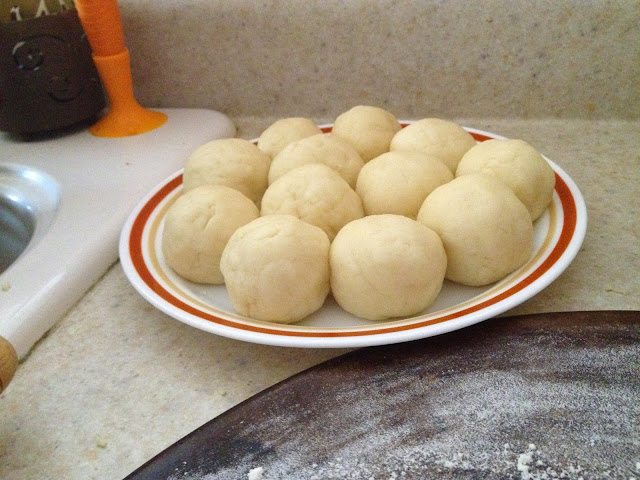 Literally, flour your hands well and roll the dough into balls. Make sure your lefse balls are nice and smooth, no cracks, because cracks can cause problems when you roll them out. Size depends on how big you want your lefse rounds to be. The bigger the ball, the bigger the round. I make mine about the size of the bulb on those nose suckers they give you at the hospital whenever you have a baby (and then you never use them again because you can never find one of the darn things, and you just buy a NoseFrida instead because it works so much better).

Put your lefse rounds on a glass or ceramic plate or pan. Now you're ready to roll them out. My mother always used a special pastry board with a cloth cover - this one, in fact:

but sadly I don't have one of those. I used my large Pampered Chef pizza stone instead (except mine doesn't have handles, because I got it as a wedding gift 13 years ago). I tied a dishcloth over it and doused it liberally with flour.

My mother also used a corrugated rolling pin with a cloth cover, but again, I don't have one. I just use a regular wooden rolling pin.

Rub flour allllllllllll over your rolling pin. (If using a corrugated pin, make sure flour gets into all the grooves.) Plop a lefse ball into the middle of your well-floured surface, flatten it slightly with your palm, like you're shaping a hamburger patty, and roll away. If you've ever rolled out a pie crust, you'll want to roll it like that -- start in the middle and work your way out, working your dough into a nice, thin, round circle. 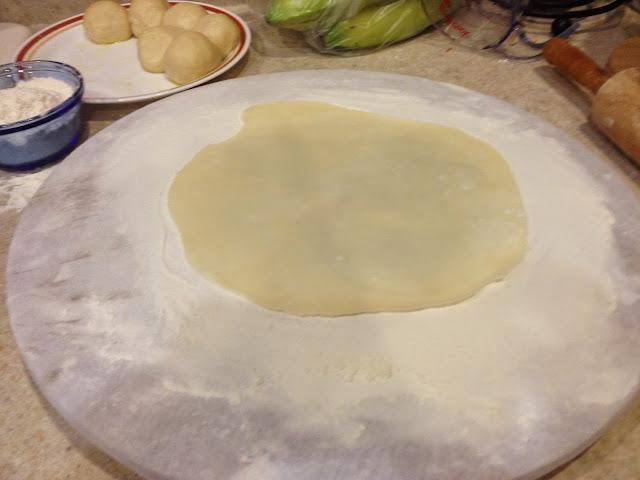 If you've never rolled out a pie crust and/or you need to see an example, start at 13:23 of this video (the entire video is worth watching if you're a more visual learner).

Now comes the tricky part. You need to transfer this paper-thin lefse round onto the griddle.

The absolute best tool to use is a lefse stick: 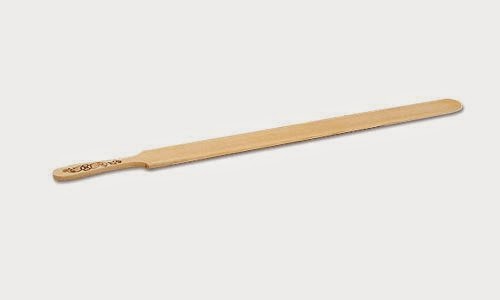 But (big surprise!) I don't have one. So, I used a Pampered Chef frosting spreader: 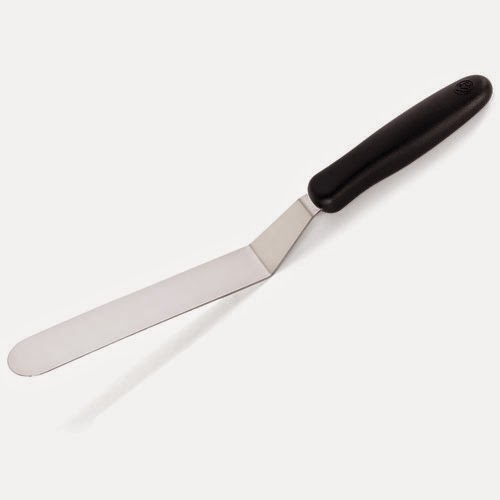 Not quite the same but it worked surprisingly well. It would have been easier if it were longer, but I had to make my lefse rounds on the small side anyway, owing to the size of my grill, so I made it work.

Slowly and carefully slip the end of your stick or spreader under bottom part of the lefse (i.e., the side closest to you), and s l o w l y slide it forward until it reaches the other end. If you rip a hole in your lefse, stop and re-roll. If you made it to the other side with no rips, lift the stick/spreader (your lefse will be dangling from it, with each side hanging down and the middle supported on the stick) and transfer the lefse to the grill. Lay it down flat and slip the stick/spreader out. Use your fingertips (quickly, because it's hot!) to straighten or smooth the lefse on the grill surface.

This is one of the hardest parts, and it can take a lot of practice. I really recommend watching the video above, because it helps to actually see someone do it.

You cook the lefse on one side for about 30-45 seconds. Watch for bubbles in the dough, and peek under the edge to see if brown spots have formed. 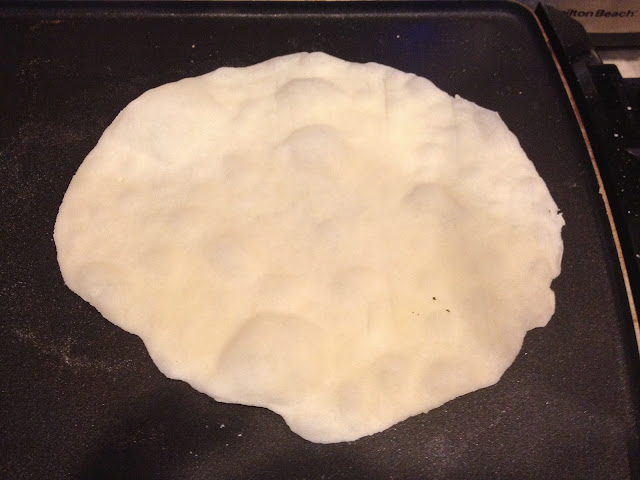 If so, flip it over using the same method you used to transfer it to the grill. The second side will cook faster. Lift the lefse off once it's done and transfer it to a cooling rack. Per the advice of my mother, I used wax paper between the layers and covered the cooling rounds with a dishtowel so they didn't try out. You can also buy lefse cozies, and I imagine tortilla warmers might work as well, although I've never tried this.

Wipe off any excess flour from the griddle and start the whole process over again.

Once your lefse rounds have cooled, store them in Ziploc freezer bags and keep refrigerated, or frozen if you aren't going to eat them right away. (But be sure to eat a few fresh off the griddle; they're best that way!)

Warm in the microwave for 15 seconds prior to eating, if they've been refrigerated. I like mine spread with butter, sprinkled with white sugar, and rolled up. My grandfather used to eat his with butter only, and they can be eaten with no topping at all. I've even heard of some who wrap it around meatballs.

If you've read this far, kudos to you! Hope you enjoyed my long-winded tutorial. Happy Syttende Mai!
at May 17, 2015