Another Saint in Heaven

I hate to break my blog fast with bad news, but it's 2:30 in the morning and I ate too much Halloween candy before bed. That's not the bad news, that's just the reason I'm blogging at this hour. Also, I apologize for the stream of consciousness blogging that will follow, I just need to get all of this out but I don't think it will be very coherent.

It is such a baffling loss. I had two prior ultrasounds this pregnancy, one at eight weeks and one at ten weeks. Both times, the baby was measuring right on target and had a beautiful heartbeat. I could even see him or her wiggling around.

Then, at what was supposed to be a routine prenatal appointment at 12 weeks, my midwife could not find the baby's heartbeat on Doppler. She wheeled in a portable ultrasound machine and did a belly ultrasound, which showed a baby about the right size but too still, and no flicker of a heartbeat.

Even so, we held out a thin shred of hope. The portable ultrasound machine was old and fuzzy, so she sent me to a nearby radiology practice for a better quality ultrasound (the practice I go to does have an in-house, high-quality 3-D ultrasound machine, but the tech only works Mondays and Fridays, and this was a Wednesday).

But our hope was extinguished. Although the baby was measuring exactly the right size for his or her gestational age, there was no heartbeat. Our baby had died.

I had a D&C the following day. I briefly thought about taking pills to induce labor instead, and delivering naturally, but I couldn't bear the thought of going through all that pain knowing it would end in heartbreak. Or miscarrying at home with the children around. Or having to deal with the baby's body myself. Also my doctor usually recommends a D&C if the pregnancy has progressed past 10 weeks, as he has observed a higher rate of complications with miscarrying naturally past that point.

Once again, I went in for surgery. Many of the same nurses were working in the surgical department and remembered us from June. They were shocked and sad to see us return.

And once again, we have had to bury another baby. The same section of the same cemetery, the same deacon performed the service, and we even had several of the same friends present. The same tiny casket, with the same little blanket covering it. 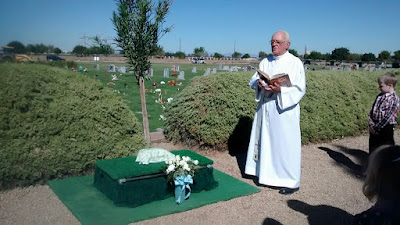 We named the baby Jude, since we found out about his or her death on the feast day of Saint Jude, patron of impossible causes. I had just finished a novena to him on the day of my appointment. In the time between my first and second ultrasounds, I begged St. Jude for a miracle, but it was not to be.

I am having a much harder time with the aftermath of Jude's loss than I did with Francis'. With Francis, I was able to accept his or her loss as a fluke. Granted, I had had two prior miscarriages before Francis, but they hadn't been consecutive. I've brought five healthy babies to term (Peter's birth defect notwithstanding). I thought, surely, my "pattern" would hold and my miscarriage would be followed by a full-term pregnancy. I even began making plans as a portent of hope - discussing names, hiring my doula, planning for maternity leave, even unpacking my maternity clothes. I had started wearing some, as my regular clothes were starting to get tight.

But my hopes were dashed, and it was made even more inexplicable by the fact that by all accounts the baby was healthy and thriving throughout most of the first trimester. I had much less nausea than usual, but I attributed that to the fact that I was taking some additional vitamin supplements. Plus, I had had terrible nausea and vomiting with Francis, so I knew that bad nausea did not necessarily equate to a healthy pregnancy.

And now I just feel at a loss. Is there something wrong with me? Did I do something to cause this? Do I have low progesterone, or a blood clotting disorder, or is it because I'm approaching advanced maternal age (I turn 35 on November 3) and my egg quality is declining?

Or is there another reason altogether? Does God think I'm a such a terrible mother that I don't deserve to be blessed with another living child? Intellectually I know that's not true, but in my darkest moments I still wonder. I wake up in the middle of the night and start crying when I remember that I'm not pregnant anymore.

I spoke to my OB about having genetic testing done on Jude, but it would cost us $2500 out-of-pocket and that is just not an expense we can bear right now. In addition, my OB pointed out that if the tests did show something wrong genetically, it's not really something we could act upon, and he prefers to perform tests that yield an actionable outcome.

He is going to refer me to a reproductive endocrinologist, though, for more extensive testing on me. Maybe I do have some sort of blood clotting disorder or genetic mutation that has caused my four losses, and I've just been amazingly fortunate to bring five healthy children to term. Maybe there's something we can do next time, if there is a next time. Assuming we ever get pregnant again, I know I am definitely going to get my progesterone tested first thing, just in case. But my OB doesn't think progesterone deficiency was a factor in my loss, since the placenta takes over progesterone production at 10 weeks and it's unlikely to have a late miscarriage caused by progesterone issues (usually that kind of deficiency will cause an early miscarriage). Plus my progesterone has been tested with other successful pregnancies, and was always at an optimal number. Still, I don't think he would object if I asked to be tested, and it may prove to be one more piece of the puzzle.

I feel guilty for taking this loss so hard when I do have five beautiful, healthy children. But they are grieving as well. My oldest daughter is especially devastated; she has longed for another  baby sibling now that Peter is a toddler and not a baby. She especially wants a little sister, but she understands that the baby's gender is beyond our control. Telling her that Jude had died was one of the hardest things we've ever done.

And as a consequence I'm terrified of getting pregnant again. Obviously it's too soon - both logistically and in terms of the grieving process - to make any decisions in that regard, but I know that if we do choose to get pregnant again, my first trimester is going to be a time of constant fear and trepidation, not joy. And even having successful ultrasounds that show a a living baby won't help take away the fear.

And yet I know I shouldn't feel that way either. God has given, and God has taken away. My babies are with God now, and they will never know pain, will never know sin, will never know heartbreak or loss. They are perhaps the most fortunate of all my children in that regard. But it hurts that I will not know them this side of heaven.

It feels so strange to not be pregnant anymore. I can't quite seem to wrap my mind around it. One day I was pregnant, the next I was not - but there is no baby in my arms to help me acclimate to the change. Part of me wants to give away all of my maternity clothes, baby clothes, and baby gear, just to get the constant reminders out of the house. Part of me feels that's foolish because… What if? I don't know. Something to think about later, I guess.

I've been writing for about an hour now and it's about time I shut things down and try to get more sleep. If you've made it this far, thanks for "listening."