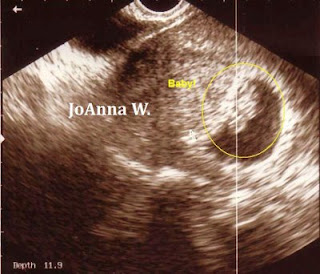 2. Now that I'm feeling (reasonably) confident that this pregnancy won't end in miscarriage, we've started discussing names. So far, we have one main boy name with two backups, and two girl names we can't decide between (I like one best and Collin likes the other best, although they're both beautiful names). We still have a while to decide, of course, especially since we aren't finding out the baby's sex until birth. Until then, we've nicknamed the baby "Thor," because Collin thinks it looks like an Asgard at this stage of pregnancy.

3. As for gender preference, we'll be happy either way, of course... but Collin would like another boy. This baby and William will have about the same age gap that he does with his middle brother, and they're very good friends. Collin would like William to have a close relationship with a brother, too. A boy would be nice as we still have a lot of William's baby clothes (nothing below 3-6 month, though, because we gave away so much when we moved); however, I think a girl would be wonderful as well. I love buying all those beautiful frilly dresses.

4. Speaking of clothes, I need to start buying maternity clothes. I have a few shirts, but that's it (again, gave most away when we moved). Guess I'll be hitting the thrift stores and Once Upon a Child (and maybe the clearance racks at the local Motherhood Maternity)! Too bad it's not rummage sale season around here.

5. I showed Elanor the ultrasound picture and explained to her that there was a baby in Mommy's tummy, and that when the baby was born she could help me feed the baby, and clean the baby, and read to the baby. She thought about this for a moment, and then asked, "Can I help snuggle the baby, too?" I said yes, of course she could, and tried not to cry.

6. I won a podcast contest last week! I listen to the weekly Among Women podcast, and a few weeks ago the hostess announced a contest, the prize being the book Mother Teresa: Her Essential Wisdom. All you had to do was send in an e-mail asking to be entered. I did, and I won! It's a wonderful little book (and a terrific podcast, too). Podcast #16 is the one where she announces my win. :)

7. We are going to make a third attempt to see "Up" this weekend. This time, instead of finding a babysitter, we're just going to take the kids with us and hope for the best. They really enjoy the other Pixar movies, especially WALL-E and Finding Nemo, so I'm hoping it'll go all right. This time, I plan not to gorge on popcorn and then be sick the rest of the day, as happened when we saw Harry Potter 6. Thankfully, the nausea seems to be petering off a bit.