1. 12 weeks today! According to my BabyCenter e-mail, the baby is about two inches crown-to-rump and is the size of a lime. 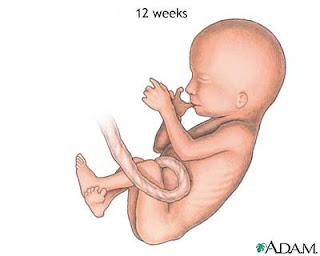 I have an appointment on Tuesday and I'm hoping we'll be able to hear his/her heartbeat via Doppler. I swear I felt the baby kick yesterday, but it could have easily been something else (such as wishful thinking).

2. I have a cold. Ugh. Seems to be a summer tradition with me. I caught bronchitis when I was pregnant with Violet. My nose is all stuffed up and my sinuses hurt.

3. William has been making huge strides potty training. For the last two days, he has voluntarily gone to the bathroom in the morning and evening, without me or Collin having to take him or remind him. I'm so thankful; it'll be nice to have only one in diapers for a while.

4. How adorable is my new nephew Carter? If I had more time off I'd drive the 14 hours and go see him! What a cutie!

5. I read a marvelous book earlier this week, one I've been meaning to purchase for quite some time. I noticed it was on sale at Ignatius Press when browsing Chesterton titles, as they were having a sale on all Chesterton books on his birthday (I bought The Apostle of Common Sense) so I picked it up too. It's Murder in the Vatican: the Church Mysteries of Sherlock Holmes. I think I'll write a review of it for Catholic Phoenix, but suffice it to say that I enjoyed it tremendously.

6. Speaking of Chesterton, I had a realization the other day. Collin and I were confirmed into Catholicism on Chesterton's birthday (May 29)! How cool is that?!

7. Something else very cool - Cam is giving away one of her beautiful snoods over at A Woman's Place! Head on over there and sign up!