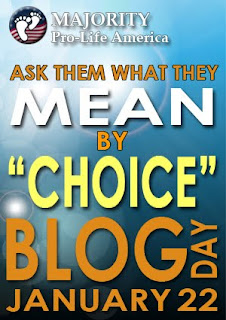 Many of the signs being held by Planned Parenthood supporters at the State Capitol rally said "Trust Women." I'm assuming this is a shorter version of the pro-choice slogan, "We trust the women of this nation to make their own morally correct choices."

I've been thinking about this more, and I've come upon a contradiction that seems irreconcilable on several levels.

(1) This slogan assumes that the choices involved have equal moral weight. Choosing adoption or choosing to raise the baby on one's own are indeed choices with equal moral weight, and pro-lifers do indeed "trust women" to make either of those choices and support either one wholeheartedly. However, the choice of abortion involves killing an innocent human being, which is an intrinsic moral evil. It does not carry the same moral weight as the other two choices, which are not intrinsic moral evils.

What purpose do these laws serve if we can (apparently) trust women to make the morally correct choice 100% of the time? Given that women are regularly convicted of various crimes, that doesn't seem to be the case.

Moreover, abortion would be unheard of if we could "trust women" to act responsibly and not have sex (the act of which conception is a natural biological consequence) if they aren't prepared for the possibility of conception.* After all, shouldn't we "trust women" to know that all birth control has a failure rate?

(3) PP supporters oppose legislation that gives women the choice to view an ultrasound of their unborn child (such legislation was recently enacted in Texas, when an appeals court overturned an earlier injunction).

PP supporters trust women to make their own moral choice against abortion as long as women remain ignorant about accurate medical information regarding their child's level of development.

If this information is made available, however (or if pro-life sidewalk counselors are allowed to be seen or - O horrors! - heard), then suddenly women become feeble-minded fragile china dolls who must be saved from their own gullibility, for their own good.

So, "trust women" - but ONLY on the issue of abortion, and ONLY if they remain ignorant of medical facts regarding fetal development.

*Obviously, this applies to the 99% of women who conceive after consensual sex and not rape/incest situations.
at January 22, 2012