This Is What We're Up Against

A few days ago, a Facebook friend (someone I knew in high school) posted the following:

I'd largely been ignoring posts like this, but I decided to respond. 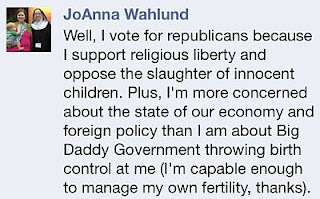 There was more debate on the thread, but the OP sent me a private Facebook message and we had an interesting exchange. I'm posting it here (with her knowledge and permission) as an illustration of what we're up against. Based on other conversations I've had, this how many young women (mid-to-late-twenties) see the world. Her words are in green, and my responses to her are in blue.

Hi Joanna! First off, I am more than respectful of your choices. Coming from someone (like myself) who needed an abortion to save her life given the genetic disease I have...I am personally pro choice. I love my little girls that I already had and I wanted to live for them instead of die for a baby I hadn't even met.

So, a baby isn't an actual child unless (general) you can "meet" them. I have to say I was rather offended by this, given that I have two children I never got to "meet" -- but who are still my beloved children nonetheless.

Not to say it was an easy choice for me and I still think about it. I assume you'll have the respect for me to keep this private. [Note: I did ask her permission to post this exchange on my blog at the end of our conversation, and she gave permission.] There have been and are some great Republicans and Democratic leaders :-) have a great day! You have a beautiful family.

I'm sorry you were lied to, but direct abortion is never necessary to save a woman's life. (I can send you proof of this.) I'm sorry you felt you had to make that choice, but even so 99.9% of women who abort do so for reasons other than life of the mother.

I had some great doctors at [Prestigious Hospitals] given me medical evidence to the contrary. They have all studied medicine. I think it was a good idea to listen to them. When you have M.D. behind your name, I will happily listen to your medical opinion.

I can put you in touch with several MDs who can prove that you were lied to, if you wish.

I am pretty happy doctoring at the best clinic in the nation. [Prestigious Hospital] had a great reputation and is world renowned

It's sad that the best clinic in the nation told you that you had to kill an innocent child to save yourself. It's never necessary. It may not be easy, or cheap, but it's never necessary. [Prestigious Hospital] has bought into the culture of death. They see unborn children as expendable, as opposed to innocent human beings with the right to life. That's why I never vote Democrat - I believe in human rights for all human beings, even in difficult situations.

And isn't a human right to decide what happens to your own body? No one has to have an abortion

Yes, but a baby has his/her own distinct body and DNA.

They have the right to choose

No one should have the right to choose death for an innocent human being.

So you would rather have unwanted babies born?

Now, note the jump in topics here. We'd been talking about her choice to abort due to medical reasons, and upon recommendation by her doctors. It segued into a generic "woman's right to choose," and all of a sudden she's saying that babies who aren't wanted should be killed. It doesn't sound like she's really thought about this topic all that much.

I don't believe anybody should be killed just because somebody else thinks they are unwanted. By that logic, we should just go in and kill everybody in foster care right now.

There is no such thing as an unwanted child. Millions of couples are currently waiting to adopt.

Abortion is a human rights issue. All human beings should have the right to life, born or unborn.

Scum that rape are not innocent human beings, are they? But at least they get due process of law before they are executed. Unborn children don't even get that much.

Are you pro death penalty?

Somehow, I knew that was coming...

It's really irrelevant to the question of abortion, because the unborn are always innocent. Convicted criminals are not, and society has the right to protect the citizens from them. However, I feel that in our society the death penalty is no longer necessary because we have effective ways to protect society without resorting to the death penalty.

Do you think divorce should be illegal?

Whaaa...? What does this have to do with abortion? I attempt to bring the conversation back on topic...

No, I frankly don't care what contracts the state chooses to enact or dissolve. But it's really irrelevant to the question of abortion, which is what we're discussing.

I am just fascinated by your views. Yes they are different than mine. You are an intelligent, well thought out woman though.

Sadly, it seems she's never heard the pro-life viewpoint expressed by an actual pro-lifer before.

Do you think it's acceptable that 99.9% of women get abortions for reasons other than rape/incest or life of the mother?

I think they should have the right to choose. I don't agree with everyone else's choice, no, but I also wouldn't have had 4 kids like you did. That doesn't mean that everyone should be limited to two children just because I think it is a good number.

I mean I think it is crazy it is so hard for people to adopt and that it costs so much money given any random drug addict woman can pop out an unwanted child whenever she wants.

So it's a "right to choose," with no thought as to the consequences of that choice.

And I don't think people should be able to choose death for another innocent human being. I believe all human beings have the right to life, regardless of the circumstances of their conception.

In the meantime, more innocent children will die, and Obama will continue persecuting the Catholic Church. The economy will keep tanking, gas prices will continue to rise, And jobs will be lost as companies shut down or slash hours in order to avoid having to comply with Obamacare.

I doubt given the nature of our country's government abortion will likely always be an option.

Perhaps. But with Obama in office, it will be much harder to enact regulations regarding health and safety.

I meant it will likely never not be an option.

Bush didn't take it off the table

More of the country is pro-life than ever before. At the very least, I would like to Roe versus Wade repealed so that individual states can enact their own regulations.

Now that Obama is back in office, he will be able to appoint judges to the Supreme Court who will continue to champion for abortion on demand without apology, at the expense of innocent lives.

But we'll keep working to change people's hearts and minds, and continue to provide assistance for those in crisis pregnancies.

I never voted for Bush, by the way, and I wasn't too thrilled about Romney when he got the nomination.

Do you see what I saw? All her talking points are taken from Planned Parenthood's rhetoric. She gives no thought whatsoever to the children who die, only the women who shouldn't bring "unwanted" babies into the world. And when I asked if abortion on demand was acceptable, she dodged it by saying women "should have the right to choose." She won't say what it is they're choosing.