MY ULTRASOUND PICTURES HAVE BEEN FOUND!! Apparently a lady found them in the parking lot of the grocery store and took them home. She Googled my name (it was on the pictures), which led her to my blog, which led her to my e-mail, and she got in touch and told me she had them. They're in the mail back to me! Yaaaaaaaaaaaaay!!! Thank you for your prayers, St. Anthony!!

Camping last weekend was fun, except for the fact that we arrived at the campsite at 8:30pm, started setting up the tent, and discovered that the poles were missing. (Apparently we couldn't fit them in the bag with the rest of the tent back in November, the last time we used it, and forgot that they weren't in the bag this time around.)

In an amazing coincidence (or "God-incidence"), my SIL had packed an extra set of poles from a tent they had thrown away due to a defective zipper. Collin and his brother drove into Podunk, AZ and managed to acquire some duct tape (which we will ALWAYS, ALWAYS bring with us in the future), and my FIL managed to rig up the tent using the extra poles and some duct tape. It took until 12:30am, but the darn thing got put up and stayed up the rest of the trip.


We thought about going camping this July, when my dad comes for his annual weeklong visit, but my dad said he'd rather do something or see something he never had before. So, we discussed our options and decided on... Mexico! 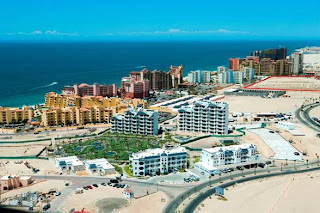 We plan on going to Puerto Peñasco ("Rocky Point") to be precise. It's a fairly short drive from Phoenix and one of the safer places to go. We're still pricing our options, but I think we're going to rent a two-bedroom condo at one of the resorts for a couple nights and spend the a day or two just lounging around at the beach.

I've never been to Mexico, and neither has my dad, so we're both really excited to see it. Collin has been to Nogales before, but never to Rocky Point, so it'll be a new experience for him too.

It's a special day today, and since most of my readership are NFPers, I think I'll share why. Nine years ago today, I became a mother. ;) Gotta love NFP, which helps you know these things!

No sleeping in late for me tomorrow - I need to be on the computer at the stroke of eight to sign the kids up for swimming lessons this summer. Hopefully I can type fast enough to get my first choice of time slots.

Kara's having one last Facebook auction for Colton, starting Sunday! Check it out!!