I've been putting a lot of thought into what I am going to do for Lenten practices this year.

I was toying with the idea of giving up Facebook, but I actually get a lot of spiritual edification from Facebook. A lot of my friends post inspirational quotes from saints or really good Catholic articles from around the blogosphere.

Plus it's my primary way of keeping in touch with my family in North Dakota, so I would be loathe to deprive them of cute kid pictures for 40 days.

While I was reading Heidi's excellent post (http://wheresmylist.blogspot.com/2014/02/its-beautiful-life.html), I had an idea. I've been thinking recently that I really need to step up my private devotions, because I've been really deficient in that area for quite a while. At the same time, I don't want to set myself up for failure by trying to fly too high and make a Lenten commitment that is unrealistic, given my current schedule constraints.

So, I have decided to make the commitment to attend daily mass, go to confession, or go to adoration/Stations of the Cross at least once per week for the duration of Lent. My parish has an evening daily mass once per week, on Wednesdays, and adoration on Fridays, plus confession times on Mondays and Saturdays, so I should be able to make one if those on a weekly basis without having to drive a long distance.

I also intend to do more spiritual reading. I've been meaning to finish Chesterton's The Everlasting Man for ages, and I want to re-read Pope Benedict XVI's Jesus of Nazareth (I haven't read the sequel so I should pick that one up, too).

Speaking of Chesterton, last year during Lent I listened to "The Ball and the Cross." It's excellent! Best of all, you can find it online for free in ebook or audiobook format. 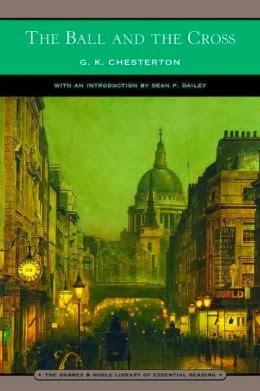 Here is a brief excerpt from Chapter VIII - it is a conversation between MacIan, a faithful Catholic, and Turnbull, a proud atheist:


"I often fancy that your historical generalizations rest frequently on random instances; I should not be surprised if your vague notions of the Church as the persecutor of science was a generalization from Galileo. I should not be at all surprised if, when you counted the scientific investigations and discoveries since the fall of Rome, you found that a great mass of them had been made by monks. But the matter is irrelevant to my meaning. I say that if you want an example of anything which has progressed in the moral world by the same method as science in the material world, by continually adding to without unsettling what was there before, then I say that there is only one example of it. And that is Us."

"With this enormous difference," said Turnbull, "that however elaborate be the calculations of physical science, their net result can be tested. Granted that it took millions of books I never read and millions of men I never heard of to discover the electric light. Still I can see the electric light. But I cannot see the supreme virtue which is the result of all your theologies and sacraments."

"Catholic virtue is often invisible because it is the normal," answered MacIan. "Christianity is always out of fashion because it is always sane; and all fashions are mild insanities. When Italy is mad on art the Church seems too Puritanical; when England is mad on Puritanism the Church seems too artistic. When you quarrel with us now you class us with kingship and despotism; but when you quarrelled with us first it was because we would not accept the divine despotism of Henry VIII. The Church always seems to be behind the times, when it is really beyond the times; it is waiting till the last fad shall have seen its last summer. It keeps the key of a permanent virtue."

"We once did make it a test for these things," said MacIan smiling, "and then you told us that we were imposing by force a faith unsupported by argument. It seems rather hard that having first been told that our creed must be false because we did use tests, we should now be told that it must be false because we don't. But I notice that most anti-Christian arguments are in the same inconsistent style."

Email ThisBlogThis!Share to TwitterShare to FacebookShare to Pinterest
Labels: 7I7, lent