A friend of mine asked me for Catholic book recommendations. She's a cradle Catholic but fell away from the faith and now is re-examining it.

On my recommendation, she's already read "Something Other Than God" by Jennifer Fulwiler and is currently reading "Rediscovering Catholicism" by Matthew Kelly.

What follows are more recommendations for her (in no particular order). Please leave a comment if you have a book recommendation that I didn't mention!

Pope Awesome and Other Stories by Cari Donaldson @ Clan Donaldson. A lovely romp through the adventures of a Catholic convert mom and her feisty, fun-loving family. 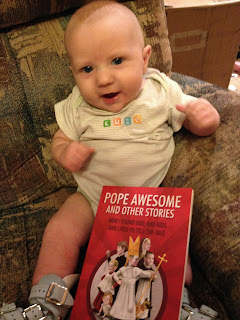 It's one of Peter's favorites.

Style, Sex, and Substance: 10 Catholic Women Consider the Things that Really Matter, edited by Hallie Lord. I actually haven't read this one yet (I know, I know, it's on my list!) but I've heard nothing but rave reviews from other Catholic women.

The Catholics Next Door: Adventures in Imperfect Living by Greg & Jennifer Willits.

I've listened to Greg & Jennifer's podcast for years, and was thrilled when they released a book. It's a wonderful reflection on Catholic family life and practice. 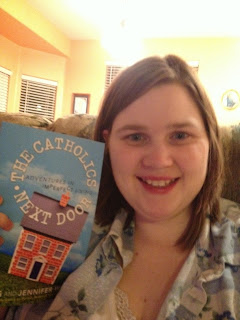 The Protestant's Dilemma: How the Reformation's Shocking Consequences Point to the Truth of Catholicism by Devin Rose at St. Joseph's Vanguard. I first read this book after Devin self-published it (it was then called "If Protestantism was True") and was thrilled when Catholic Answers Press decided to pick it up. It's an excellent analysis of how Protestant doctrine doesn't hold up to intense logical scrutiny as compared to Catholic doctrine.

From Atheism to Catholicism: How Scientists and Philosophers Led Me to the Truth by Dr. Kevin Vost. A truly outstanding conversion story rooted in science, logic, and reason.

The Sinner's Guide to NFP by Simcha Fisher of I Have to Sit Down. This book is, hands down, the best explanation regarding the Church's teaching on "pelvic issues" (birth control, contraception, NFP, etc.) that I've ever read.

I haven't yet read Answering Atheism: How to Make the Case for God with Logic and Charity by Trent Horn, but I know he's a fabulous writer so I feel confident recommending it.

Also, while not a specifically Catholic book, a must-read (or, must-listen) is C.S. Lewis' Mere Christianity. It's available as a free audiobook here (last link in the post).