2. I just took a trip on the wayback machine and read his birth story. He was born at 10:46pm, and by the time all the excitement had died down and the newborn procedures were over, it was past 1:00am. Collin laid down in the "daddy bed" and fell asleep almost immediately. The L&D ward of the hospital he was born at was on the top floor, and our birthing room had a wonderful view of the city. I remember gazing out at the gorgeous night sky with my beautiful baby boy snuggled next to me and feeling like the luckiest and most blessed woman on the planet.

Every time I see his face, I feel the same way. 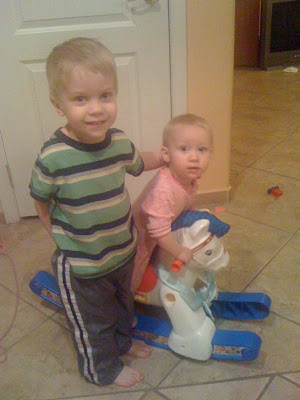 3. We'll have a small celebration for him tonight, but we're planning on having a combo birthday party for him and Violet on March 5 (the day she turns 1). I guess I should probably get the invitations out. Then I'll join the Procrastinator's Club of America (or maybe I'll do that later...)

4. Because I'm a glutton for punishment, his gift (other than our trip to Disneyland, which was partly his birthday gift) is a toy drum. He's always pretending to play the drum with my pots and pans and plastic utensils, so I figured he'd enjoy something resembling an actual drum instead.

5. My nephew, Mason, turns three on Saturday. My sister and I were actually due a month apart -- me on March 21 (Good Friday!) and she on February 22. As it turns out, I went into labor a month early at 36w3d, and she went several days overdue. Her water broke the afternoon after William was born, and she gave birth to Mason in the same hospital, actually just down the hall from my room, at around 11:30pm on February 26. It made it pretty convenient for relatives; they got to see two babies in one visit. :)

6. I booked my grandma's return flight home on March 6. She has a doctor appointment on March 15 with a specialist that she was unable to reschedule, so she's going home earlier than planned (usually she stays until April). I'm going to miss her so much -- her visits always seem way too short, and the kids just adore her.

7. Her plane leaves at 7:15am -- ugh! We'll have to leave the house at something like 4:30am to get there early enough. I'm going to a good friend's wedding shower in Tempe at noon that day, so after I drop her off I'll have to kill some time. Too bad I won't be able to go somewhere and take a nap! I'll probably just find a bookstore or somewhere to browse in; I never have a problem killing a few hours if I'm looking at books.