Baby update: I had an appointment yesterday and everything looks good. His/her heartbeat was 145bpm, my bp was good, and weight is stable (actually, I've lost two pounds since my last appointment and am still about 5-6 pounds below my pre-pregnancy weight). I'm measuring right on target, which was surprising to me given that I feel like Shamu. The doctor thinks I'm just carrying this baby differently than the others, which is why I feel so big compared to past pregnancies. I also got a flu shot. Ow. My arm still hurts. I guess it beats getting influenza, though.

Well, here it is, October 21 and the world didn't end. Poor Harold Camping. Wonder what spin he'll come up with this time to excuse his invalid prediction to his followers?

We had a parent-teacher conference with Elanor's regular classroom teacher and special education instructor today. Bottom line is that she's making progress, albeit slowly. We're considering holding her back a year, depending on what progress she makes by spring. We're starting the paperwork now just in case we make the decision to do so. Generally, her teacher told us, the administration is reluctant to hold back a student, especially one with an IEP. Collin and I are both wondering if it might benefit her, though, given that she still shows significant delays when it comes to reading and writing. It's something we'll have to research more, I guess. However, her teachers repeatedly praised her imagination, her positive attitude, and her loving, happy personality, so that was nice to hear.

I finally got Elanor's school picture order (long story short, the order got lost somehow after it was delivered to the school and they finally found it): 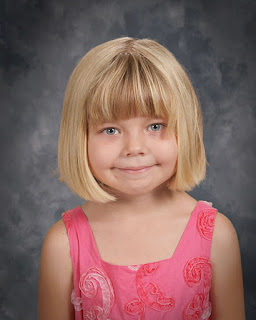 Collin's employer has decided to extend their support hours. Worst case scenario, Collin might end up with a schedule where he's working until 11pm. The thought makes me want to cry. It's imperative that I keep the kids downstairs and quiet while he's upstairs working; I'm not going to able to put them to bed if he's working that late! I might be able to put the older kids to bed and just take the youngest into the master bedroom with me 'til he's off of work or something like that, which is not a fun prospect, given I'll still have to keep them very quiet (not sure how that will work once we have a new baby...). We can only hope and pray that he'll get a halfway decent shift (like the one he has now, 7:30am-6:30pm, 4 days per week) instead of a late night one. He can list his preferences but it's basically a randomized draw. *sigh*

Elanor starts T-ball next week. I want to get her one of these: 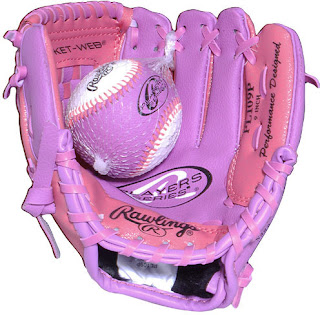 Back in my day I don't think they made pink-and-purple baseball gloves! I had a boring brown one when I played softball as a kid.

I do indeed have my new iPhone 4S now, and I absolutely love it. Siri is a very handy tool (and rather amusing at times). It's so much smoother, faster, and shinier than my old phone! I can't wait to use it for pictures and video of the new baby. :)