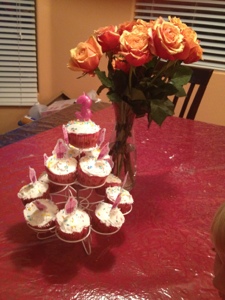 Violet turned 3 on Tuesday! We had strawberry cupcakes to celebrate.


All of the pictures of the birthday girl are on Collin's phone, but here is one taken last weekend when we had a small pizza party (for both her and William) at Peter Piper Pizza: 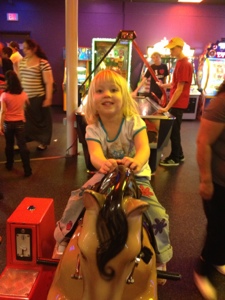 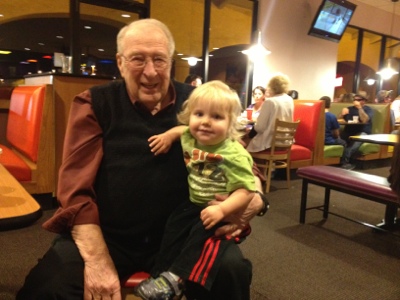 Collin's grandparents were there too. Here's Grandpa William with Gabriel! 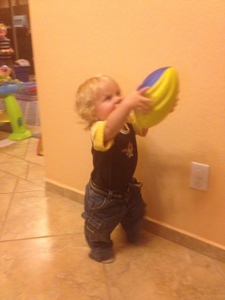 Gabriel's such a boy. He LOVES tossing a football around. (In this pic, he's handing it to Daddy so Daddy can "throw" it back to him.)


Taxes are done, yaaaaaaaaaaaaaaay! And we're even getting a refund. There was a snafu with my W-4 from when I switched jobs in July and we were fearful that might mean we owed money, but thanks to our four lovely little tax deductions running around, it wasn't a problem. :) Who says having a large family doesn't pay??

The Conclave is starting Tuesday! I'm optimistic that my next Quick Takes will be rejoicing over the election of our new Pope. :) I've even downloaded the Conclave iPhone app!

The most recent issue of Columbia magazine (Knights of Columbus publication) contained prayer cards for the election of the new Pope. I thought the prayer was lovely:

O Lord Jesus Christ, Supreme Pastor of Your Church,
we thank you for the ministry of Pope Benedict XVI
and the selfless care with which he has led us
as Successor of Peter, and Your Vicar on earth.

Good Shepherd, who founded Your Church
on the rock of Peter’s faith
and have never left Your flock untended,
look with love upon us now,
and sustain Your Church in faith, hope, and charity.

Grant, Lord Jesus, in Your boundless love for us,
a new Pope for Your Church
who will please You by his holiness
and lead us faithfully to You,
who are the same yesterday, today, and forever.