On Day Two of the Edel Gathering, nothing was planned until 12:15pm. I LOVED THAT. I loved  not having to get up and go first thing in the morning unless I wanted to.

Luisa and I went to The Taco Shack for breakfast to meet up with some gals I know from a Facebook group -- some were Edel attendees, some weren't. We had yummy breakfast tacos and great conversation.

Afterwards Luisa and I walked to a convenience store to grab a few items and then headed to the Omni. We were an hour early for registration, so we found a place to charge our phones and relaxed for a bit. During that time, I saw Jen Fulwiler and introduced myself. (Total fangirl moment for me...)

At registration, Cari had each attendee pull a random saint's medal from a box and put it on ribbon, the objective being to find the other two people with your same medal. The first trio to return to the registration desk got a prize (and it took about 15 minutes for that trio to find themselves and win).

My husband is searching for work and the saint I drew at #edel14 is St. Joseph. Coincidence? I think not! Thanks for the shout out, St. Joe!
— JoAnna (@astarofhope) July 26, 2014

We had a bit of time to peruse the vendor tables, and there was so much great stuff!

We also got swag bags with some wonderful freebies. Definitely the best swag bag I've ever had at any conference, hands down (for example, each attendee received a FREE prayer pillowcase!).

There was also a "create your own nametag" station.

We hadn't even heard the first speaker yet and we were having a blast!

Peter is loving this chandelier at the Omni. #edel14 pic.twitter.com/5K0i3mUh2v


The first speaker was Hallie Lord, and oh my goodness she was fantastic.


It was great to hear all the babies cooing during the talk!


Haley Stewart and Marion Fernandez also gave talks, and I don't have time to recap them but suffice it to say they were all EXCELLENT. All talks were recorded so I will be sure to link them here once they're online.

After the talks and vendor table fun, we went back to our room to rest before preparing for the evening entertainment -- a Tex-Mex buffet with dancing and karaoke afterward.


The food was phenomenal and the karaoke even more so. If you haven't already, take the time to watch Kelly Mantoan rap to Flo Rida - her performance was worth the price of admission alone.

Someone else also got up and did some karaoke (badly).

I had spent so much time singing and screaming and cheering the whole evening that my voice was cracking all over the place, and I think I weirded out a lot of people by doing The Saga Begins. But some people were, I think, impressed:

And then, right after I got off the karaoke stage, this happened: 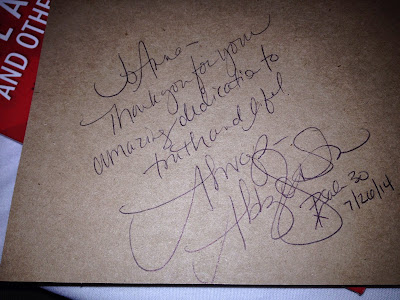 This gorgeous pregnant lady (who looked really familiar) walked right up to me and said, "Hi, JoAnna, I recognize you from Facebook. I'm Abby Johnson."

ABBY JOHNSON CRASHED THE EDEL PARTY, Y'ALL. AND SHE KNEW WHO I WAS AND WANTED TO MEET ME.

I am STILL geeking out about it.

Stupid me was too stunned to get a selfie with her, but I did have the presence of mind to get her autograph at least.

Peter and I danced too. 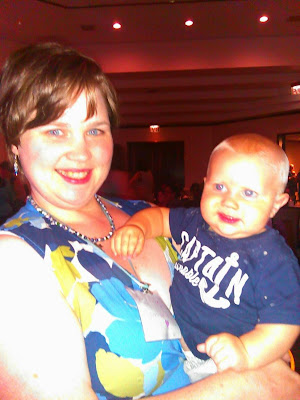 I was told he was unofficially voted the cutest baby at Edel. I have to agree but then I'm biased. :)

Luisa and I left the party about 11pm -- I would have liked to stay longer but little man was all tuckered out.


I was so revved from the party it took me a long time to get to sleep. It had been a fabulous evening.

Email ThisBlogThis!Share to TwitterShare to FacebookShare to Pinterest
Labels: edel