As I mentioned in my Friday Quick Takes, I prayed outside of the Glendale Planned Parenthood today as part of the 40 Days for Life prayer vigil. 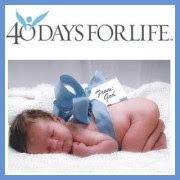 It was an amazing, humbling, Spirit-filled experience. I've done it once before, last year, but I was alone and my prayer time was largely uneventful. Not so this time.

I'd sent out an e-mail to several pro-life friends at my church inviting them to come pray with me, and when I arrived, my friend Patti and her mother were there, along with another Catholic woman named Mary, who was just leaving. She'd been at the clinic for quite a few hours, and someone had thrown a full can of Coke at her. :( Thankfully it didn't hit her, although she got sprayed with some of the soda.

The four of us chatted for a bit and then Mary left. As Patti, her mom, and I were about to begin the Rosary, a car pulled up beside the sidewalk and a man, beaming from ear to ear, stuck his head out of the car window.

"I just wanted to thank you ladies," he said. "I have a four-month-old baby boy and he's alive because I saw y'all praying outside here and it touched me."

We thanked him and he drove off, still smiling. It was a nice start to our vigil!

During the hour we prayed, we saw several girls enter and exit the facility. Some seemed to be in great pain and could barely walk. One girl was carried out by a young man. In the last few minutes we were there, we saw a family pull up in an SUV -- it looked like a 40-something woman, two teenage girls, and a very little girl, maybe three years old. Patti and I were sick at heart that someone would bring a child so young inside that place of death, so we just prayed harder.

Patti later confided in me that a close relative of hers had had an abortion, and that her 16-year-old daughter had recently had a pregnancy scare. (She also has a 9-month-old grandson who was almost aborted, but thankfully his mother changed her mind at the last minute.) Both events had prompted her to jump in her car and head over to the PP when she got my e-mail. I was so grateful for the company, and I hope she can join me again! I plan to go next week as well, and every week until the vigil ends.

(Please pray for Patti and her family, as her relative who had the abortion is making some very destructive life decisions, and Patti is very worried about her.)

I had a handmade sign of my own that said "Women Deserve Better than Abortion" and I noticed that most of the PP customers either took the other driveway out of the facility or, if they went out the driveway by the sidewalk where we were praying, they noticeably averted their eyes so as not to look at us. I hope we gave them something to think about.

The sign I ordered from Heritage House arrived today, so I plan to carry that next time. I'm thinking of going again on Saturday, perhaps with our whole family, to pray some more.